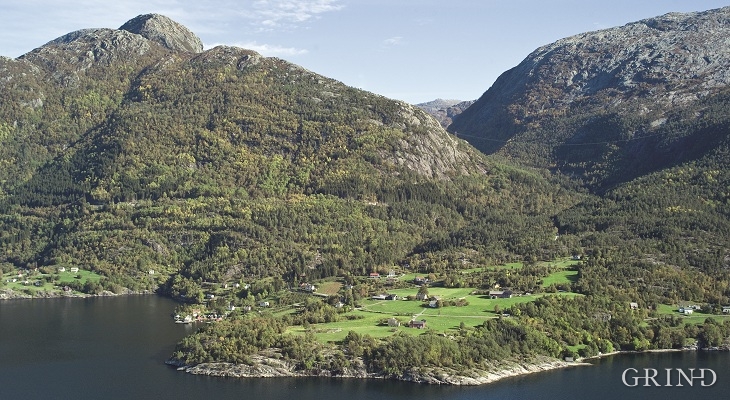 In the middle of the flat pastures at Torsnes was the farmyard of the estate, undivided until the middle of the 1700s. The old main building with the “blue hall” and the “knights’ hall” was demolished around   1860. Today the farm is divided into four units. Two of them still belong in the Galtung family. (Svein Nord).

When bishop J.Neumann was on a visitation in Hardanger in 1825 he also visited Torsnes, the seat of the Galtung family. They were then in the process of pulling down the old dwelling house on the farm. As the committed observer of ancient monuments and antiquarian buildings that he was, bishop Neumann has provided us with interesting details:

“All the same I saw in a half demolished Castle, one of former times’ grand Halls. How humble and thrifty our Forefathers were! Low Doors, dark, and not large Rooms – but these were decorated, as in a church, with moral texts, painted on all the Roof Beams and Arabesques on the Walls, and Names and Coat of Arms on the small Windows, framed in Lead.”

This house that was demolished, was perhaps from the late 1500s or early 1600s. We may compare this building with another building from the same time; the beautifully decorated “bed-loft” of the mighty farmer at Gjerde in Mauranger; in later centuries called “Målabuo” (the painted house). Through inscriptions this house has been dated to 1589, and we can easily imagine that it may have been the same painter from Bergen, who has had assignments both at Gjerde and at Torsnes.

In 1504 a new, stone-built cowshed was erected on the farm by the owner at the time, Peter Nilsson. The walls of this stood right up to the 1950s. Today there is nothing left of the old estate.

Gaute at Ænes, who lived around 1150, and his sons JON and MUNAN were all “king’s men”. Gaute Jonsson at Mel (born around 1190) son of Jon, is often mentioned in Håkon Håkonsson’ saga. He became a king’s representative at the king’s coronation in 1217, and one of the king’s most trusted men. When Håkon set out on his armed raid against the Scottish king in 1263, he made Gaute the adviser for his son while he himself was absent. Gaute Gautesson at Hattaberg, mentioned in 1287, when he gained the title of baron, was also a king’s man. A diploma shows that Tore Gautesson and his brother Sigurd Galte put their names to a letter about the shed remains at Sandvin. In Icelandic annals from 1367 we see that Ivar Galte, Tore’s son, arrived at Kolbeinsosen in North Iceland from Hardanger. He came on a ship carrying wooden materials, probably for the bishopric at Holar.

We later learn that Gottshalk, the brother of Peter Nilsson at Torsnes was bishop in Holar from 1500 to 1520. The third brother, Guttorm, was a court representative in Hjaltland (Shetland) before he sat as court representative in Bergen until 1539. At the beginning of the 1600s Lauritz Johannesson Galte, took over the farm, and he was one of the biggest landowners in Hardanger. He owned 53 farms and parts of farms. He was married to Elisabeth Orning from Stord, who cultivated medicinal herbs in her garden. Their son Lauritz (born around 1610) was expelled from the country after killing his relative, Axel Mowat jr, in a duel. One year later the king called him home again. Lauritz Galtung became an admiral and received the King’s seal on his nobility in 1648. He then assumed the name Galtung. Lars Hamre has pointed out that Sigurd Galte and Sigurd on Torsnes must be two different persons, and that there is unlikely to be any connection between the family of the king’s representative in Kvinnherad and the medieval family at Torsnes.