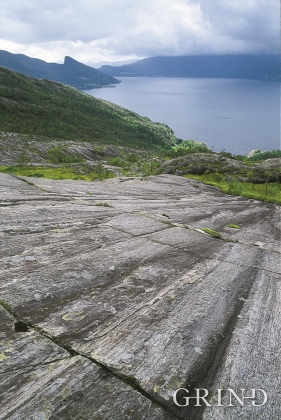 It is quite extraordinary to take a walk in Heriane, where the surface of the compressed gneisses is almost as flat and lifeless as pavement. Jonahornet in the background.(Svein Nord)

At Hereiane on warm summer days one you can walk barefoot up the hill from the fjord all the way up to 400 metres elevation. The naked, furrowed bedrock often causes travellers who see it from the north side of the fjord to wonder. Why does it look like this, and why is there so little that grows here? It is a long way to the heavy metal industry in Ålvik and Odda, and there hasn’t been a forest fire in modern times.

The reason is the quartz-rich bedrock, which is almost totally devoid of soil or plant nutrients. Vegetation occurs in some places, nonetheless, especially in creek beds and cracks in the bedrock. Bits of humus and soil collect here and there, just enough to provide these modest species with what they need of nourishment. The most typical plant species are heather, heath, bog asphodel and moor grass. The pizza-shaped mats of grey moss are even more hardy as they grow directly on the bare stone. Pine is the only tree sort that can survive, but these grow far apart, and seldom reach more than just a few metres in height.

Heriane, Jonahornet and Samlen are all remnants of a layer of strongly flattened gneisses. This layer lies immediately over phyllite and mica schist. The phyllite basment functioned as a giant sliding plane for the huge rock masses that migrated southeastward 410-430 years ago. This migration was caused by the collision with Greenland during the long Caledonian Mountain -building event. The rock mass just above the sliding plane was especially affected by these movements. The gneiss layer once covered the phyllite and the underlying bedrock over the whole area. Now, the only remains on this side of the fjord are at Heriane, Jonahornet and Samlen. On the Folgefonna plateau it is entirely missing.

The slatey, layered gneiss layer plunges down into Hardanger fjord and continues under the north side of the fjord. The plunging is a flexing or fall that occurred when the north side of Hardanger fjord sank down several kilometres. The sinking began slowly just after the Caledonian mountain-building event was completed. The granitic gneiss on Hereiane contrasts strongly with the phyllite and mica schist that surrounds the gneiss in a bow from Svåsand over the east side of Skorpa and down to Herand.

This area has been evaluated for mass quarrying of puck. Out of respect for the special fjord landscape – with its value for national conservation – the quarrying plans were abandoned.