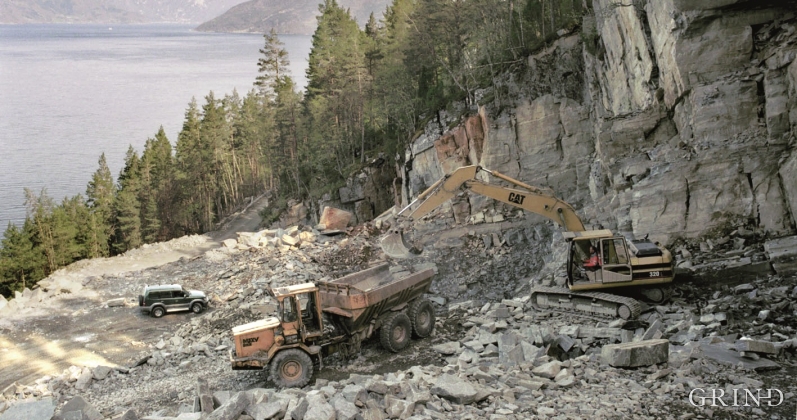 Jondal has one of the country’s oldest slate quarries. Roof tiles have been extracted here since the end of the 1700s, but the quarry is much older. Kvernurdi is mentioned in a diploma in 1421, when Bård Sigurdsson at Torsnes became the owner through a settlement. Already then it must have been customary to cut millstones here.

Essentially all of the slate quarries in Hordaland use stone from the bottom of the Caledonian thrust sheet, just over the phyllite, which in turn overlies the basement. All of these slates are metamorphosed sandstone. The Sålesnes-slate is the only exception. This is a strongly flattened granite, a granitic gneiss, which originally contained big crystals of red K- feldspar, together with quartz. But, the centimetre-sized feldspar crystals were very reduced in size by pressure. The remains of some of the crystals can still be seen as red “eyes” in the slate. Otherwise, the feldspar grains have largely been altered to light mica (muscovite). The same altered granitic gneiss re-emerges at Hereiane, where a bit more of the original bedrock is exposed. The metamorphosis was not equally intense at all localities. The ruffians from the Middle Ages knew how to choose the sites with the strongest metamorphism to get the best cuts of slate.

Mica is a flake mineral that has grown in a certain direction at this locality, contributing to the development of the strong slate structure in the bedrock. Such metamorphosis from granite to granitic gneiss is typical in the thrust sheets on Westland. But, seldom to such an extent as in Sålesnes, with so little left of the larger feldspar grains and so much generation of mica. This intense and thorough alteration occurred at great depth. It was the result of the bedrock being pressed down deeply under the influence of the same forces that caused the collision with Greenland. The effect of the pressure on the bedrock varied, and the granite at Jonahornet was more affected than other areas.

The mica gneiss is best suited as large, slightly thicker slabs. Nonetheless, it has been much used in roofing. Best known are the big, rectangular roof plates, which are quite common in Hardanger. But, smaller roof slates have also been produced. In earlier times, millstones were a main product, with baking slabs and drying ovens as additional items. Since then, the Sålesnes slates have been widely used in sidewalks and in building stone, both in Bergen, Haugesund and Stavanger.

Around the middle of the 1800s and up until 1900 slates from Sålesnes was one of the most important export articles from Hardanger, and freighting them was taken care of by the sloop skippers. Stone-loaded sloops sailed from Hardanger, and especially from Jondal, around the entire coast, north and south, to Jæren with slates, and home again with potatoes. Referring to the work in the stone quarry in his five-year report, the law officer in Jondal says that a lot of the stone goes to Bergen, Haugesund and Stavanger. The workforce consists of 30-40 men, they work mostly spring, summer and autumn and they earn “reasonably well”. The law officer in Strandebarm writes about the work in “Helleurdi” and says it is difficult to find farm workers as at least 40 smallholders, coast dwellers and occasional workers from the area work at Sålesnes, from March until November.

In the report log of the Harbour Master in Bergen, we see that in 1896, from July to November, 151 tons of slate have been logged, freighted on the ships “Nornen”, “Manger” and “Solesnes”, and on the sloops “Brødrene”, “Johanne Karine” and “Haabet”. In 1904 from March to October 269 tons slates have been logged. In the years up to 1910 the amount was the same, with up to 150 men working in the quarry. In that year 5,000 square fathoms of pavement stones and roof slates were shipped out from Sålesnes. Earnings were good, and with 25% of the sales income in profit the landowners also made good money. Today, large trucks have taken over from the sailing ships. But, the hammers are still in swing in the slate quarries of Jonahornet.

Hellebenkane” (the slate banks) were the very workplaces where the workers cut the slate. They lay as “bays” up along the mountain. When the workers had blown off a section, they started by splitting the section with a steel knife, first in half, then in four, and finally in eight pieces. When all sheets had the same size they used the big hammer and cut them off straight, as wide as the slates were to be. Thereafter the sheets were finely cut for paving and finished at the edges with a flat hammer, into large base slates (rastheller) with narrower cover slates.

The old quarrymen in their everyday costumes were a sight: on their head a sou’wester or an old hat, a woollen neckband and a wide, long woollen shirt full of stone dust at the chest and the sleeves. Every Friday the owners came to demand rent money, and every Saturday the workers started on their journey home if the weather allowed. And when you met them on a Sunday morning at the church, in fine woollen clothes, newly shaven and combed, you could hardly recognise them. They were well-off folk these men.

The roads down to the fjord were covered with flagstones and wound their way down to the bay. Here they slid down large loads of slates. At the rocky harbour the sloops came very close. Long ladders were laid from land over to the ship rail. On these they pulled the flagstones out and lowered them into the ship’s hold: roof tiles, floor tiles, pavement stones and stair tiles.