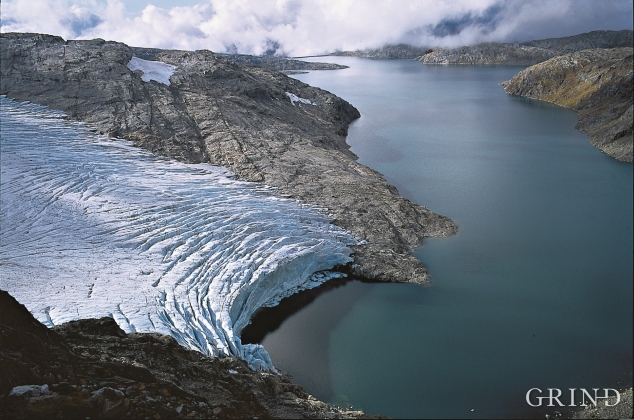 The icefall from Folgefonna calves out in Lake Juklavatnet. The icefall is often used in glacier hiking, and is a challenge for both experienced and inexperienced hikers. The crevasses show that the glacier is moving. (Svein Nord)

The glacier is not only white – it is full of colour. The colours have several sources: glacial flour, desert dust, or living algae. And the light refraction in the ice creates cool, bluish nuances – a masterpiece of the interaction between cold and light.

The green algae Chlamydomonas nivalis is a cosmopolitan species: it occurs in arctic and alpine areas almost everywhere in the world. In its resting stage the algae gives off a red pigment, which protects it against strong ultraviolet rays. The pigment is the same as that which gives salmon meat its red colour. After crossing the glacier in 1893, attorney Kristian Bing from Bergen wrote, referring to the red colour in the ice, that “a large animal had recently been killed”.  On glaciers in Norway this algae is an important primary producer – it helps to make the ecosystem complete, from the simplest to more advanced organisms. In addition, it helps support a surprisingly high biological productivity on the glacier.

There are hundreds of species of snow-dwelling green algae in the world. In summer – with strong natural radiation – it is possible to establish a biological community in the snow. Typically, snow-ecosystems occur only where the snow remains for most of the summer, or in permanent snow and ice. Some animals feed on these algae. Most typical in Norway is a species of springtail (Collembol) and a few species of rotifer. Sometimes we also find ground beetles and spiders on the snow and ice, but these play a minor role ecologically. They are probably only there to hunt insects that have taken an involuntary tour over the ice.

Dark, soiled areas in the ice are not caused by long distance transport of pollution, as many believe. Inside the ice there is always sand, silt, and stone, as well as finer glacial flour. This is material that the glacier has scoured loose from the bedrock. Where melting is most pronounced, the loose mass will collect and appear as a dark area in the ice. Another source of miscolouring can be desert dust that has been wafted up to great heights during sandstorms in the Sahara. If the wind blows from the Sahara-region and northward, we can get a red-brown fallout over Norway. The fallout is extra easy to see against the snow, but may also be visible on cars or laundry hanging out to dry.

By the end of the road up to Fonna, by the ski centre, southwesterly winds transport snow from the top of the glacier down the lee side along the slope. For most of the summer, therefore, the crevasses are covered with snow. In years with little snow – or in unusually warm summers – blue ice is exposed lower down on the glacier. The blue colour is caused by light-refraction. Short wavelengths (blue and green) have a larger refractory angle in ice crystals than longer ones (red). This is why blue-green light predominates in the ice.

The red colour comes from a green algae with red pigment. (Bjørn Moe)

The grouse thrives in the mountains beneath Folgefonna. (Lars Krempig)