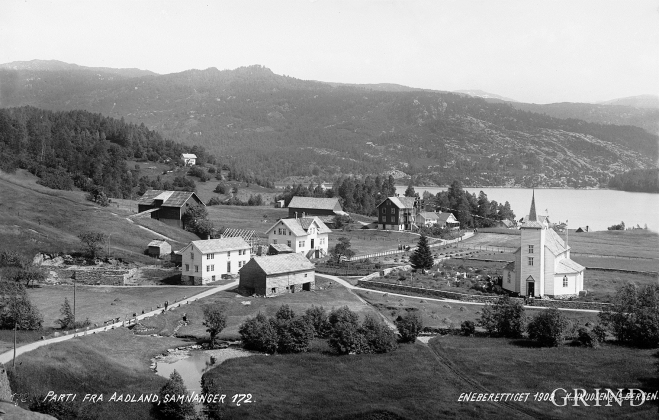 Ådland, innermost in the Samnanger Fjord is an old church centre and transport centre; a nodal point in the transport from sea to land. The white painted church standing today, was built in 1851, but there were two older churches here in former centuries.

The church at Ådland is first mentioned in written sources in 1329. This must have been a stave church, which was replaced by a timbered church in 1652. This year was inscribed above the arch in the chancel of the old church. The “church inspectorate” in 1686 still mention a timbered church at Ådland, but in 1851 this was no longer usable, and a new one was built. This is an interesting type of church which is unlike the many “hall” churches erected after the middle of the 19th century. The building was designed by theologian Andreas Grønning, who also designed the church at Sveio. The church has a somewhat special basilica form, with slanted side naves that give the building almost an eight-sided shape. Nevertheless, we see that this is one of the early neo-gothic churches with pointed arched windows in the nave.

Ådland Hotel was built in the middle of the 1880s, after the road from Trengereid to Ådland was completed. The first guests were mostly country visitors from Bergen – who either came by horse transport   from Trengereid or with the fjord boats. Many people will also  remember the hotel as a stopping place for the blue buses with an “opportunity for refreshments”. The hotel was runing until 1969 and the main part was finally pulled down in 1877.

Around the turn of the previous century Ådland grew into a small rural centre with steamship agency, two country stores, bakery, post and long distance telephone lines. Most of it was closed down from the  1960s onwards. The post office and the last shop were moved to Bjørkheim in 1993.

Soon after the railway to Voss was opened, roadwork was started from Trengereid station to Ådland in Samnanger (1883-1885). The road was continued from Ådland to Tysse 1893-95 to reach Norheimsund in 1906. Many smallholders in Samnanger had a welcome additional income from the road construction, and when Bergen Lysverker started hydropower development in 1910, more work came their way. As time went by there were Samnanger people everywhere where construction work was going on in West Norway and even further a-field. From being a small supplementary job to farming, construction work came to be the main employment for many, thus Samnanger in time became one of the most typical construction work municipalities in Hordaland.The road from Trengereid to Ådland was completed in 1885, and already the following year a transport centre was established at Ådland, with two fully employed horses and two reserve horses. For 11 øre  per kilometre for every horse, the travellers were transported in a transport wagon or sledge to Ådland railway station at Trengereid, a distance of 11 km.

The transport was in operation the entire year, and the transport log, which has entries until 1910, shows that some years could have as many as 200 trips. Amongst the most frequent customers were the factory owners at Samnanger woollen factory, road engineers and various state employees. On 26 June 1892 Edward Grieg put his signature in the log. He needed all four horses for his party. The first car tried the road in 1909. But the first regular car transport route between Trengereid and Norheimsund was started by Tomas K. Aadland in May 1917 with a seven-seater canvas-covered Dogde. He later did the route with two cars. The speed limit was 25 km/h, but through Tysse and in Tokagjelet, only 15 km/h. By and by more cars with permission for transport started up. But when the road across Skuggestranda was completed in 1932, and Bergen obtained a continuous road connection with Hardanger, licence for all transport on the section was granted the newly established Bergen-Hardanger Billag.