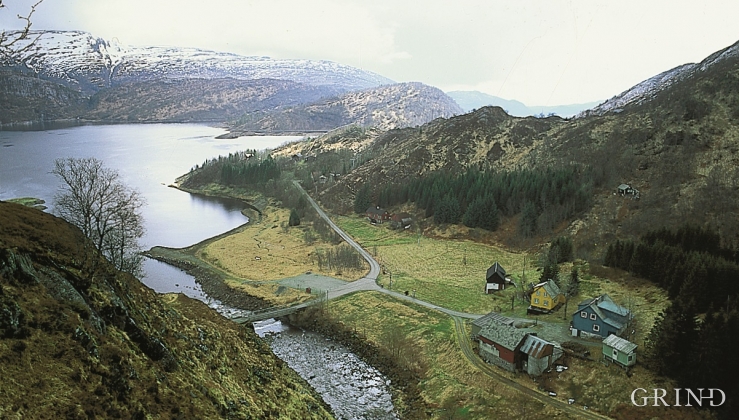 From Kvitingen nature preserve. The weather station is located beside the road between the farm and the road crossing. (Svein Nord)

Few other places in Hordaland, or even the whole country, get as much rain as in the Samnanger mountains. The mountains here simply attract wetness. The weather station on Kvitingen has continuous measurements all the way back to 1900, and the measurements have documented several records for the county. The station is therefore much used as a reference for the rainfall in western Norway.

The average increase in annual rainfall reflects that there have been both more days with rainfall and more days with big amounts of rain. The reason for this is that more weather comes in from the west to western Norway in past years. Comparable, and even a bigger percent-wise increase in rainfall, occurred in the inner districts of the county, for example, in Hardanger and Voss.

During the past century there has been an increase in rainfall in western Norway. The amount of rainfall in winter especially has increased. Most people wonder what the reason might be, and if the increase is going to continue into the future?

Most of the rainfall comes from the west during the winter half of the year. Between a low pressure area over Iceland and a high pressure area near the Azores, there is just a broad band of strong wind that presses the moist air in over Northwest Europe. These air gives milder winters and lots of rain. We know that this weather pattern has become more common: compared with earlier, both the low pressures over Iceland and the high pressures over the Azores have become more stable. This is part of a larger change that is happening over most of the northern hemisphere.

The reason for the climatic change is much debated. The United Nations' Climate Panel (IPCC) thinks that it is largely a result of human emissions to the atmosphere. This gives a temperature increase on the one hand, which in turn causes more rainfall. It is expected that there will be larger variations from year to year, and often quite heavy rainfall. With the predictions we have for future emissions to the atmosphere, we should probably look forward to even milder and wetter winters.