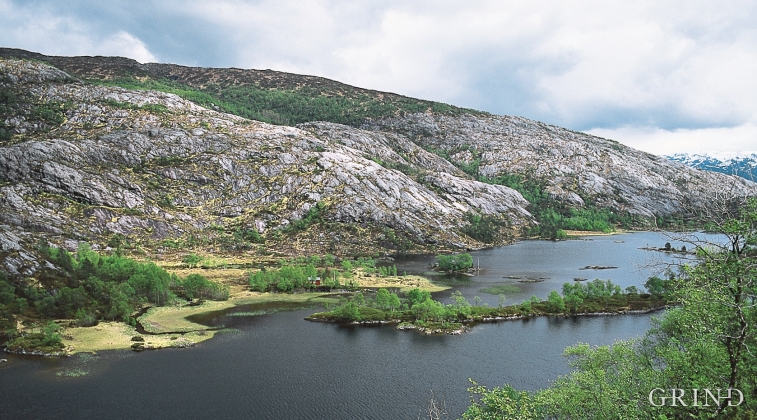 It is the nutrient-depleted quartz augen gneiss that is responsible for the barren zone in the picture. The tree limit runs both along the upper- and lower side of this zone - both forest limits are controlled by the bedrock, while the thinning and disappearance of the forest higher up on the mountainside is controlled by climate. (Svein Nord)

A barren belt where almost nothing grows, runs through the forest on the east slope of Gullbotnen. But, along the west side of the main road there is a fertile zone that flourishes with several finicky plant types. The contrasts arise from the extreme variations in the nutrient content of the bedrock.

The belt that is nearly vegetation-free is some hundred metres wide and stretches from the slope above Gullbotnen on the east side of Lake Langavatnet, southward towards Samnanger Fjord. Only very hardy plants, such as Scotch heather, deer grass, moor grass, woolly fringe moss and the scattered slow-growing pines with slender stems, manage to cling to this 480 million-year- old granitic intrusive bedrock. The bedrock, a quartz eigen gneiss, is acidic and quartz-rich, with up to one centimetre-large "eigens" ("eyes") of quartz. The hard quartz is not of any real value for the plants. In addition, this bedrock is unusually poor in sodium and potassium. It isn't until we reach a higher altitude, about 400 m.o.s, where the rocks are less acidic, that the birch forest is able to take hold. This forest stretches up to about 500 m.o.s. The lower limit for the birch forest is determined by the bedrock, while the upper limit is determined by the climate.

Beneath the barren belt, along the road by Gullbotnen, the forest is especially lush. Here, there is mostly birch forest with a little bit of hazel and grey alder. The vegetation is rich in herbs, which suggests a good quality soil. Some typical species include the greater butterfly-orchid, water avens, melancholy thistle, meadowsweet and wild strawberry. In the road-cuts, yellow saxifrage has found its niche. This plant grows in enormous amounts. During flowering time, especially from the middle of July and onwards, the mountainside will be entirely coloured in yellow. Yellow saxifrage thrives especially on bedrock with seeping water, often in the company of fairy flax, flea sedge, yellow rattle and lesser clubmoss.

The good growing conditions for the lush vegetation in the area along the road is related to the fact that there are totally different rock types that dominate here than up on the slope: nutrient-rich, calcium-rich layers of marble (see frame) and mica schist. These layers were deposited about 440-450 million years ago, in a shallow sea that covered the somewhat older quartz augen gneiss. At the bottom of these layers, in direct contact with the quartz augen gneiss, we find a conglomerate. The prominence and islands in Lake Langavatnet are made of this conglomerate. Both the calcium-rich layer and conglomerate are closely related to the layers in the Os-area. They were probably deposited in the same ancient sea.