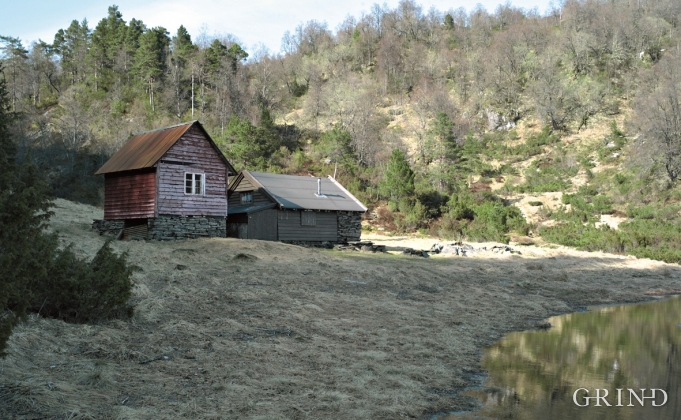 The Nordvik seter. The prayer house to the left. (Svein Nord)

The use of high-lying summer pastures is an old tradition in Samnanger with its many fertile mountain pastures. This tradition reached its high point around 1850, but it came to an end around 1950.

Around Fitja lake (336 m.a.s.) there have been many remote hayfields and summer dwellings. The hay-sheds are now in ruins. The Nordvika seter (mountain dwelling) at the north end of Fitja lake is the oldest one. It still stands as it was built in 1886, a notched building and a shed in natural stone.

The summer pasture ground has long traditions both as a venue for youth and music and also for religious gatherings. The tradition with the annual meeting on the pasture on a summer Sunday is still kept alive, and around 1930 a small prayer house was built where people could seek shelter.

One and a half kilometre west of the Nordvik seter lies Buhilderen (a rock shelter), which at times has been used as a dwelling since the times of the great migrations (400-600 AD) and probably up until the 1800s.