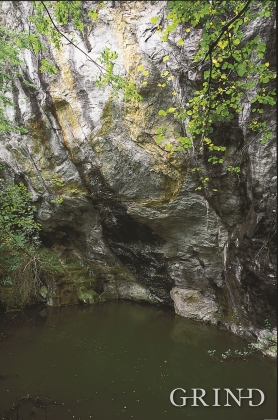 This cave in the mountainside is all that is left of the soapstone quarry at Øvre Kvernes. (Svein Nord)

Håkons Hall, Domkirken Church, Bergen Børs Stock Exchange, Permanenten and other well known buildings in Bergen are decorated with soapstone from Øvre Kvernes. The quarry is a big hole in the mountainside by the cliff just east of the farm buildings.

The soapstone occurs together with the rock type serpentine. In some places serpentine makes mystical colours and shapes in the terrain. Raudaberget and Raudskolten and similar place names have an association with the red colour in the ancient, weathered expanses of serpentine and soapstone. These bedrocks stick up like red-brown mounds in the terrain. The colour comes from the rust that is formed when the rock comes into contact with air and water.

Samnanger has the most serpentine and soapstone of anywhere in the whole county. The lens-shaped occurrences have probably arisen in or under the lowermost part of the oceanic crust that divided Scandinavia from Greenland 500 million years ago. When this sea finally closed, Norway collided with Greenland. During these processes the lenses got pressed up toward the surface and mixed with mica schists and greenstones. Serpentine and soapstone came to Samnanger 400 million years ago.

In fresh quarries the grindstone from Kvernes is green, with brownish veins of iron carbonate. Large quantities of stone were probably quarried during the period from the 1100s to the 1300s. New, big quarrying efforts were made again at the end of the 1800s, and by the Raunekleiv tunnel west of Ådland, also, soapstone is supposed to have been taken out for use in the Bergen Stock Exchange. We can see serpentine and some soapstone both along the new and old highway on this stretch of road. In Fagerbotnen one finds the biggest remaining deposit of soapstone. The road to Fagerbotnen was built around 1935 for stone quarrying, among other uses, for the Handwork and Industry Association's Headquarters and the Forum Movie Theater in Bergen. The soapstone in this area is darker green and is lacking the red-brown iron carbonate veins that otherwise are typical for soapstone from Samnanger.

Overview of the soapstone field (violet) and names with "red" in them in Samnanger. (Roald Færseth/ Haakon Fossen)

Serpentine contains heavy metal which is poisonous for many plant types. The bedrock is therefore often lacking in plant cover. Here, there is one important reason why the red colour in the rock is so clear. Pine is the tree type that manages best and it grows as scattered forest. English Yew seems also to tolerate the heavy metal, but often does not seem to have enough growing power to grow beyond just a few small bushes. With sparse or lacking plant cover, the competition between species will be less. Therefore, it is not so unusual that some plants have specialized on just serpentine bedrock. Species of the carnation family and different ferns are the most common. The ferns in the spleenwort family grow in tight towers directly in the cracks in the bedrock. In the Kvernes area there are more documented species from this family, such as for example maidenhair spleenwort, green spleenwort (picture), black spleenwort, forked spleenwort and wall rue. These fern plants are also found on other bedrock, but on serpentine they grow in especially large amounts. The carnation plant sea campion also grows scattered over the Kvernes area.

Serpentine is a dark green rock type, normally metamorphosed (transformed) from olivine. Both are heavy and quite basic (iron- and magnesium-rich) rock types. They are found in large quantities in the mantle and under the earth's crust, but only rarely on the earth's surface. During movements deep under the earth's crust, olivine- and serpentine minerals get altered to talc and chlorite. These soft minerals are the most important ones in the soft soapstone.