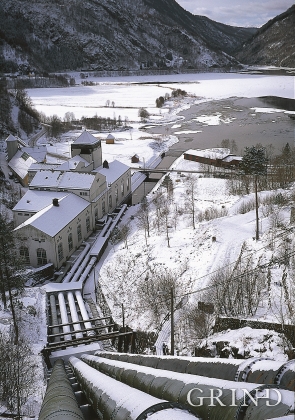 Much rain, a steep drop and nearness to Bergen meant that the power-making potential of the Samnanger water system was exploited early. Samnanger was thus one of the first power-producing municipalities in western Norway. With its subsequent expansion and new power stations, about 400 gigawatts of electricity per hour were produced on average each year. This is enough to meet the energy needs of 25,000 households.

Already in 1898, the municipality of Bergen bought up some of the waterfall rights in the Samnanger water system with the intention of making electricity, and in 1909, the building started with a strong building crew. The first building project was Frøland power station, which exploits the fall between lakes Fiskevatnet and Frølandsvatnet. After impressively rapid progress, the power station came into use already in February, 1912. Frøland power station expanded steadily and today it produces about 130 million kWh per year. Since then, the power stations at Grønsdal (1948), Kvitingen (1984) and Myra (1988) came into use further up in the same water system.

The water system is quite well utilized with respect to power production. For example, there has so far not been any requirement of minimum water levels in the stretches of river between the magazines. In periods, these sections can be almost totally drained. Inside of the 122 km² - large catchment area, there are several creek inlets, and six dams that regulate the largest lakes in this mountainous region. The strong exploitation is a legacy that goes back to the beginning of the 1900s. In our time, we have completely different demands for power production.

Seepage of pollution from agriculture is no bigger here than in other water systems, but in periods with little water in the river, the concentration of nutrients can be bigger than the organisms living in the water can tolerate. It is thus not always easy to be a fish in the lower part of the water system. But, some measures have been taken to help the fish: The old salmon ladder by the waterfall by the Samnanger factory was replaced in 2000 by a new one with an in-built fish trap. The trap makes it possible to remove fish that have a future in aquaculture net cages other places in the district. A whole 15 tonnes of salmon at the same time is supposed to have been present in the river entrance, the vast majority of which were aquaculture salmon. With a functioning salmon ladder the salmon and sea trout can swim a ways up the Frøland River, which is indefinitely protected against power development because of Fossen cliff. In the Storelva river, the fish do not get far up, since the river bed is nearly dry for long periods. There are now new standards in connection with the new concessions for regulating the Samnanger water system. As an alternative to a requirement of minimum water production, there has been an effort to build terraces in the river. The intention of this is to give the fish better living conditions.

With many medium-large and smaller water systems in Samnanger, there is still an untapped potential for building power stations in the municipality. The most probable power station projects are the small building projects in private regi. We find one of these up toward Fullbotnen, and there may be several more to come. In addition, it is important to renovate existing power stations.

The Samnanger water system has been a source of electricity for nearly 100 years.

From the construction work during the last century. Clearing up in connection with laying the pipelines. (BKK)