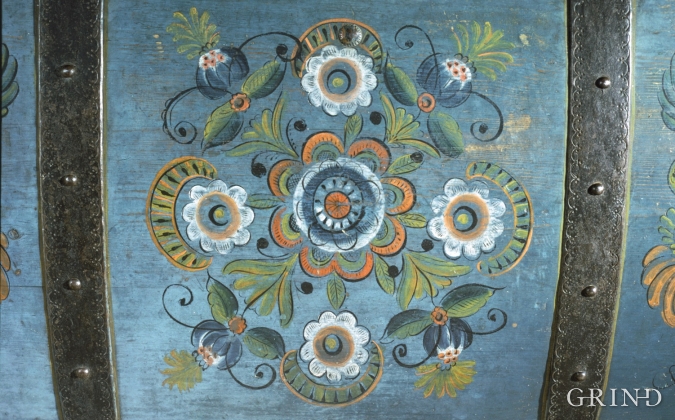 Section of the lid of the chest painted around 1830, by Nils Johannesson Tveiterås

TWO NEIGHBOURS – THE DECORATIVE PAINTER AND THE FIDDLE MAKER

In the narrow valley along the Storelva (river) lies the farm Langeland and above it Tveit and Tveiterås.

On the farm Tveit lived the fiddle maker Johannes Bårdsson Tveit, who made the famous “Tveita fiddles”. The composer Harald Sæverud (1897-1992) often visited his grandparents at Nytveit in his childhood, and he must have been inspired both by the experience of Nature and the tales of his great grandfather who was such a master fiddle maker.

On the neighbouring farm, Tveiterås we find still another gifted craftsman in the 1700s: the decorative painter Johannes Johannesson Tveiterås (1763-1842). Accounts tell us that he was supposed to have learnt the art from travelling people from Hallingdal, in East Norway, and this corresponds accurately with what we know from other sources. Johannes became a painter who established a tradition. His two sons, Johannes (b. 1791) and Nils (b. 1795) became decorative painters. Nils moved to Os and became the originator of a rich rose painting tradition in the Midthordland communities.

Johannes Bårdsen Tveit (1786-1847) on the farm Tveit in Samnanger was the craftsman for the famous Tveit fiddles, or Samningar fiddles, as they were also known. The fiddles have a high and clear tone, and they were considered the best and most elaborate in their time. Some fiddles are still in private ownership, otherwise the fiddles are found in Bergen Historical Museum and in Hardanger Folk Museum. Johannes was very meticulous about his work and the materials he used. It was said that he looked for suitable wood close to a waterfall, and when the wood was well dried he knocked on the wood to check that it had the right tone. He preferred using black alder for the base and pine for the lid, while the surrounding edging band was made of hazel. Knut Hansson Myrland (1851-1946) bought the moulds and the tools after Johannes and produced many fine fiddles.

Fiddle case for the Tveita fiddle, probably painted by Annanias Tveit from Os. The case is marked 1873.