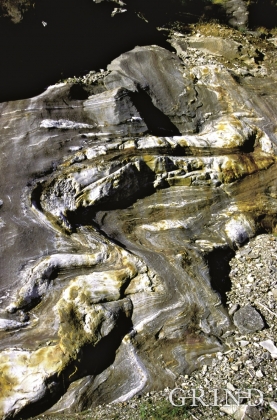 The alternations between the lighter, granitic layers and the darker gneiss makes the folding easier to see. These alternating layers have also been a contributing factor to the original formation of the folds. (Haakon Fossen)

Along the road from Frøland toward Kvamskogen, we can see that the mountain is comprised of different layers. These layers are strongly bent or folded. The layering took place during the big mountain chain movements in Silurian time. Big rock masses, thrust sheets, were transported kilometre after kilometre toward the east in this period. After the stronger movements ceased, these same masses of rock began to glide westward again. This occurred roughly 400 million years ago. On its way back toward the west, the layers got squished and were crumpled or folded.

Such folds are to be seen several places in the thrust sheet, but they are especially noticeable in the Bergsdals sheet by Frøland. That the layers didn't break up, but instead folded, suggests that the mountain was still warm enough to be kneaded like a dough. "Warm enough" in this case means temperatures over 300 °C.

The best place to see these folds is by the lower entrance to the Liaros Tunnel and futher along the road toward Frøland.