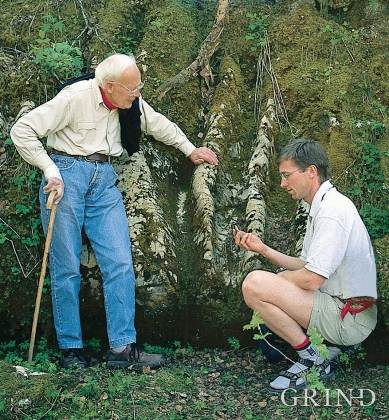 Soft shapes in the hard mountain. Professors Fægri and Fossen study the karren forms in the marble at Grasdalen. (Svein Nord)

In the calcareous belt by Gullbotnen, there is a zone of marble where karst topography has developed (dissolved calcareous bedrock). The zone is found right by the bridge over Grasdals tunnel. From the storage yard for the Roads Works in the old bend in the road, there is a little depression oriented toward the southeast. Along this valley, about 75 metres from the road, there are several small karst forms (see map, to left). Usually, there is no water here, but in rainy periods the groundwater rises up from springs, and then disappears down into a little cave that has been etched out of the white marble. In the slope on the southwest side of the depression, there is a channel-shaped groove in the marble, so-called "karren".

The marble is easily dissolved by weak acids in nature. The most common is carbonic acid (H2CO3). This acid is formed when rainwater (H2O) seeps down through the vegetation and takes up CO2 which is the end-product when micro-organisms break down dead plant material. The water laden with carbonic acid begins to dissolve the marble and make grooves in the surface. It is figured that about 1 millimetre of mountain disappears every hundred years in this way. Where there are grooves, the water seeps down and dissolves more marble. After many thousands of years of dissolution, the grooves form a cave system. In Grasdalen valley the caves are still small. The biggest known caves in Hordaland are on Varaldsøy Island.