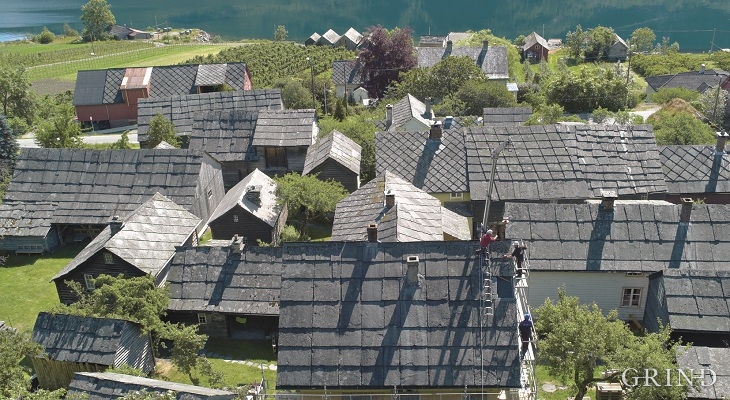 The grand farm Aga on the west side of Sørfjorden, came under protection in 1937, when the agricultural reform threatened to disperse the old clustered settlement. “Lagmannsstova”, named after the “lagmann” (law speaker) Sigurd Brynjulfsson, was already protected in 1924; one of the authentic profane wooden buildings from the Middle Ages still standing. All the same it is the farmyard itself that is the key cultural monument.

As early as in the 1300s Aga was divided into an “upper yard” and a “lower yard”.  The houses were placed in groups on either side of a road, and each yard had its grand house, a smokehouse of unusual dimensions. This house was pulled down in 1811, but Lagmannsstova  is still standing. From written sources we see that the “upper yard” is mentioned in 1398 (DN VIII); in the 1500s there were three users at Aga, and in the 1600s six, three in each part. In 1701 the users had become owner occupiers, and in 1907 nine freeholding farmers and 16 smallholders lived in the settlement.

The country policeman and representative at the Storting, Johannes Pedersen Aga, has described the demolished smokehouse, that contained timber with lengths of around 24 feet with a thickness of more than 2 feet. The building was in various places “decorated with sculptures”. Judging from the descriptions, this house has been constructed with a loft with roomy areas around, storage rooms and covered passageways. A stave-build chapel, situated south of “Lagmannsstova” was also pulled down – the church for the prominent people at Aga.

Brynjulf at Aga is mentioned in a diploma from 1230. His son, Sigurd Brynjulfsson, is known from history as knight, king’s councillor and law speaker in 1285; one of the king’s faithful servants. He disappeared after a storm at Samlafjorden around 1302. His brother Svein Brynjulfsson died before 1325, while his sister, Sunniva Brynjulfsdotter, was married to Peter Petersson Sponheim from Ulvik. Sigurd, the law speaker, was buried at the chapel in Opedal. Later, his gravestone was transferred to the parish church at Ullensvang, as the chapel at Opedal was pulled down. We know this gravestone from a drawing from 1624, where we see the law speaker as a knight with his visor down, armed with a spear, sword and triangular shield. The shield depicts three lilies, a family coat of arms that links the families of Aga and Torsnes. This is the coat of arms that has been approved as municipal coat of arms for Ullensvang.

“All friends of God, existing and future, those who see or hear this letter, Sigurd law speaker, Torolv at Jåstad, Peter at Sponheim and Jon Prest, send God’s and their greeting”.

Thus starts the letter that is signed by the good men who laid down the law in a dispute about road rights and fencing duty between Inner and Outer Bleie. “Completed and given at Aga, on the Tuesday after the Trinity mass...”

A day at Aga

The poet Heinrich Steffens visited Aga in 1794. He has described the journey in his short stories The four Norwegians (1835), that, through the florid form of the romantic style, communicates the impressions of the mood in the meeting with the landscape and the local people.

In a “vengjebåt” – the typical boat used for state employees, with a covered cabin at the back – the company is on its way into Sørfjorden in Ullensvang. It is the Danish colonel von Fallmer, who, with three young travelling companions, is on his way up to Folgefonna. They land at Aga, and the large clustered settlement, with sturdy houses in the flowering fruit garden below the mountain Aganuten, clearly impresses the colonel. Before setting out on the climb up the steep mountain sides, they enter one of the houses, perhaps to order a meal on their return from the mountain. In the afternoon they are on their way back to the settlement again.