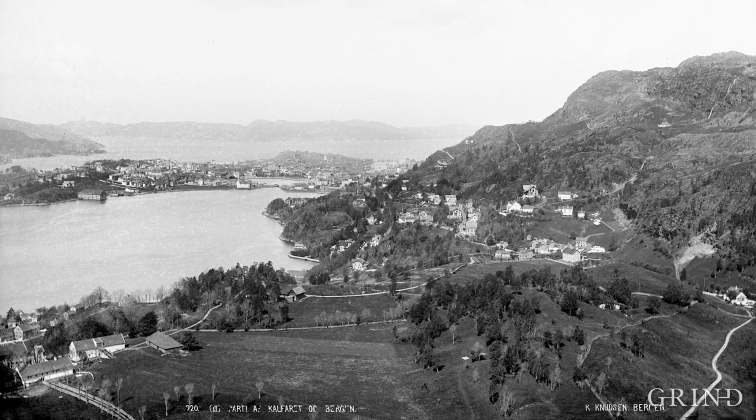 Alrekstad (later Årstad) is the birthplace of Bergen. The estate was an estate for Harald Hårfagre and several of his descendants: Eirik Blodøks, Håkon den gode og Olav Tryggvason. These first kings moved with their courts and guardsmen from estate to estate. From these estates the king ruled the country.

The king’s estates were an important base for the early power of the king. In the subsistence economy of those times it was easier to move people than goods. The king and his court moved from one king’s estate to another and benefited from the supplies provided for them until they were used up. The system also allowed a way of exercising control. When the king was absent an estate manager ruled in his place.

Following the battle in Hafrsfjord Harald Hårfagre acquired many estates that had belonged to his opponents. Alrekstad is certain to have been one of these estates and a chieftain’s seats wherefrom the old chieftain clan was evicted.

Snorre mentions Alrekstad as one of the five estates where Harald Hårfagre spent most of his time on his later years. And this is where Håkon the Good wished to go when he received the fatal wound in the battle of Fitjar in 961. Eirik’s sons also spent a lot of time at Alrekstad. But then we hear little of it until the time of King Sverre in the 1180s. After Bjørgvin was founded and Øystein Magnusson had a new king’s estate built at Holmen, to the east of the entrance to Vågen, Alrekstad was reduced to a subsidiary-farm. But as late as in 1226 there are accounts that Håkon Håkonsson used to ride to Alrekstad on Sundays. In the 1200s a church was built there. In 1277 Magnus Lagabøte donated Årstad to Nonneseter monastery. When the monastic system was dissolved in the 1500s, Vincents Lunge took charge of the property, which was included into the noble estate of Lungegården. Årstad estate was partitioned off as a recreational place for the bourgeoisie and in the first years of the 1800s, it was divided into several smaller recreational and separate properties. The town expansion in 1915 laid the basis for continued partitioning and development of land.

Alrekstad was centrally placed in a group of five king’s estates: Utstein, Avaldsnes at Karmsundet, Fitjar, Alrekstad and Seim in Lindås. Archaeological finds, names and legends indicate that these estates have been chieftains’ seats and local power centres even before the unification of the realm – even as far back as to Roman times and the time of the great migrations (300-400 years B.C.).

From a burial mound at Årstadgeilen we have finds from the 5th C. A large restored mound southwest of the Fløenbakken (Fløen hill) also dates from the Iron Age and indicates the chieftain’s seat. The farmstead was probably always located where the main buildings from the 1700s and 1800s are still situated, on the moraine terrace of Årstadvollen.

In the Icelandic saga Alrekstad is mentioned many times in connection with events and occurrences in the centuries before the time of the Vikings. Centrally placed in this ancient legendary tradition of West Norway is king Alrek, who lived at Alrekstad, and who governed Hordaland. If he were a historic person, which is far from certain, he must have lived in the 600s.

Årstad today. The king’s estate has been situated far out on the moraine terrace. (Svein Nord)

Årstadgeilen leads from the old farm steading at Årstad steeply down to Fløen. This is the old shipping lane for the king’s estate at Alrekstad. It led down to the Alrestadvågen (bay) – today known as Store Lundegårdsvann. Here was a safe landing place for ships and goods, and here was probably also the passage out to the ice-free harbour at Vågen.