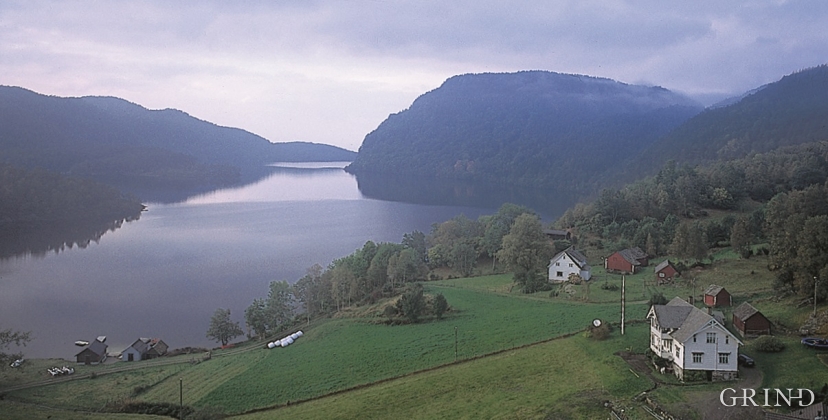 Tysnes appears to be a municipality with many bat localities, according to a county-wide survey that was carried out on this animal group at the turn of the millennium. A total of five bat species were documented. One of the bat caves is found by Lake Vevatnet, shown here looking toward the north. (Svein Nord)

For a thousand, perhaps two thousand years, Tysnes was the religious centre for western Norway, and Lake Veavatnet was the holy water. It was here that the Godesses' clothes and carriage are supposed to have been washed. After the bath, it is said, the slaves that had done the work were thrown into the water and drowned. Thus, Nerthus, the Godess of Fertility, got her offering. The Godess Cult is long over. Now it is the bats that live by the lake between the dark hillsides.

The bats by this lake live in a cave that is difficult to get to and they come out late at night in May-August. to hunt for insects. A good bat cave should be dark and frost-free, but the air should not be too dry. If it was, the animals could dry out, in any case if they use the cave for their winter hibernation.

We do not know of many such bat caves in Hordaland. It is more usual here that bats make their homes in houses - up under the eaves, under roof tiles, in attics or in woodsheds.

Still, zoologists know little about this animal group. At present, there are 11 species documented in the country. A flying bat is difficult to identify at species level, except if one happens to have an ultrasonic detector that translates their high frequency sounds to signals that humans can hear.