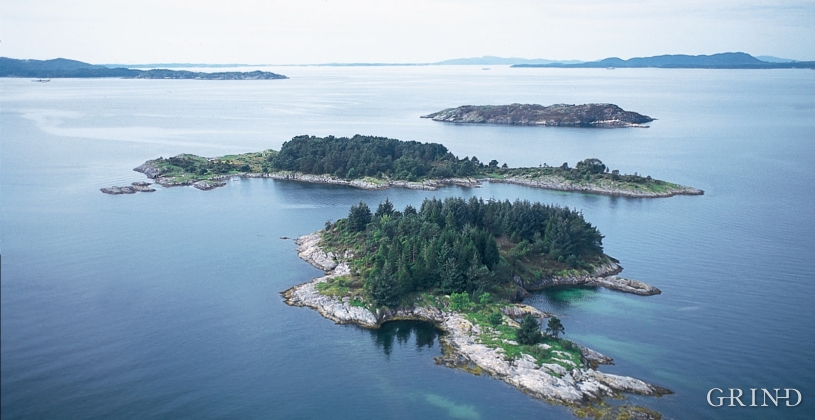 Three of the islands in the nature preserve: Litla Vesøya (nearest to the camera), Stora Vestøya and Lyngøy (behind). Lyngøya has the biggest populations of lesser black-capped gulls and herring gulls. (Helge Sunde)

The richest seabird localities in Bjørna Fjord are FLUØYANE, a group of small and medium-sized islets just east of the entrance to Våge. Here, we see many different nesting birds, but there is the danger that overgrowth will become an obstacle for nesting here in the future. On one of the islands, the environmental protection authority has promised to step in and help the birds.

The coarse heather moors that are expanding are little suited for nesting. Because of less sheep grazing than earlier, the plants are growing quite large. And when the birds first choose not to nest there, the are becomes even more overgrown. This is becoming a problem not only on the Fluøyene Islands, but also for the other seabird areas along the coast.

Since the islands are a bird reservation, the environmental protection authorities are responsible for maintaining good conditions for the birds. Parts of Lyngøya Island, where the lesser black-capped gull and the herring gull nest in great numbers, were burned off in the 1990s. This was supposed to give the younger heather a chance to grow up and replace the denser heather on the moors.

Today about 50 to 100 pairs of black-capped gulls nest on these islands, in addition to over 200 pairs of herring gulls and some greater black-capped gulls and common gulls. The terns are more unstable. The populations of grey goose are on the increase here as elsewhere in the county. Since 1985 a number of gulls and terns have been ringed, and these birds have been tracked, among other places, on the Continent of Europe and far south in Africa.

During the 1970s, Bjørna Fjord was known as a good nesting place for the Arctic skua - a gull that is famous for stealing its meals from other birds. The Arctic skua has now entirely disappeared from here. Today this species nests only occasionally in Hordaland, and then far to the north in the municipality in Fedje and Austrheim. The Arctic Skua is dependent on healthy populations of terns and common gulls. When these species decline, as has been the case for several decades over the whole of West Norway, the basis of existence for the Arctic Skua disappears.