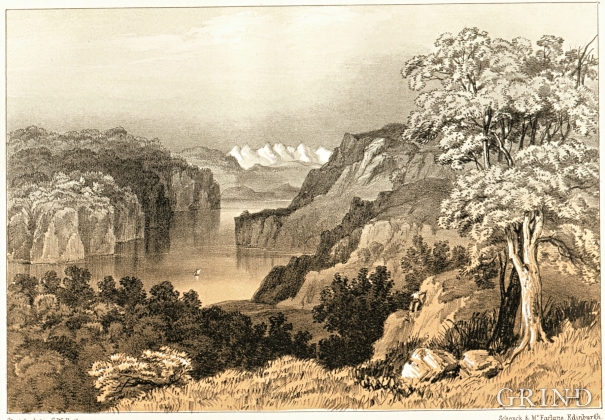 Lokksundet Sound, «Tysnes Fjord from Tysnes Oen», drawing by C.W. Rothery from 1845. Rothery was especially inspired by the nature in Norway. At Tysnes, according to his private journal, he was witness to "the most enchanting display of Norwegian nature I ever have experienced".

If you should happen to be in a small boat in Lokksundet sound when the ocean currents from the fjord meet the counter currents in the sound, you will almost certainly wish you were on dry land! Under such conditions, the waves can become so high and so steep that they break.

Bjørna Fjord is joined together with Harganger Fjord farthest to the east through the narrow Lokksundet Sound, the natural seaway from Bergen to Hardanger. At its most narrow, the sound is barely 150 metres wide. The currents in the sound are complicated, and there are many factors that control the direction and strength of the current.

Mixing of brackish water in Harganger Fjord, a consequence of the many rivers that run out into the fjord, explains why the current in periods runs mainly northward. But, the currents are in addition influenced by the tides and wind.

Changes in the current direction according to the tidewaters shows that the current mainly follows the same pattern as the tidewater in Hardanger Fjord. It runs in a southerly direction in Lokksundet Sound when the water level rises in Hardanger Fjord, and in a northward direction when the water level falls. At high tide, the northward-flowing current gets up to 3-4 knots where the sound is narrowest. This pattern can nonetheless change over short periods, and the current can shift direction every four hours under calm weather conditions. These frequent changes are caused by many kilometres of long, low waves that swing back and forth through the fjord system. These waves are also caused by the tides.

The tidal currents can be strong, but the currents that are caused by wind can make it extremely difficult for small boats to pass through the sound. This is especially the case when the wind blows from the south or southwest. The water accumulation in Onarheims Fjord then causes a through-flow to the somewhat lower waters in Bjørna Fjord. During southerly breezes with northward-flowing currents, the current speeds can get as high as 5-6 knots. If the wind reaches gale force or even stronger, it can reverse the tidal currents which then flow toward the south instead. Under such conditions, there can be many small boats that will just have to wait to continue on their journey until conditions improve.