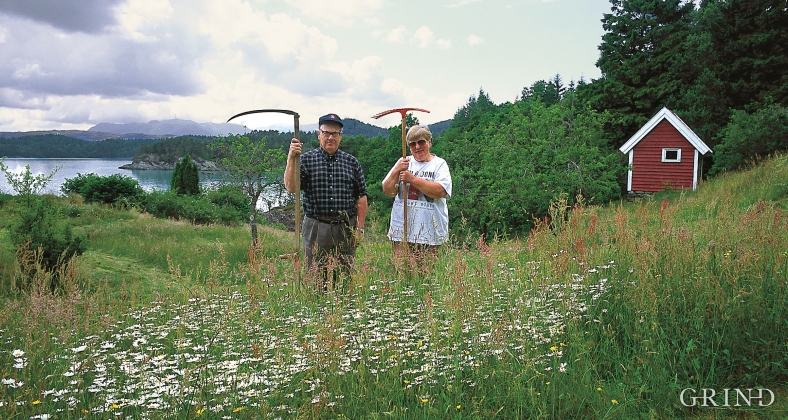 Anne and Reidar Skorpen during the hay harvest. If the flower pastures go untended for too long, they will become overgrown and disappear. (Svein Nord)

Take a tour to Ånuglo on a warm summer's day. You can anchor up in Skipavågen and go exploring along the beach. Or, you can find giant holly trees and ivy inland on the island. If you take a trip to the small farms on the west side - one of which is still in operation - you can experience colourful flower meadows from a time most dream of, but few can still remember.

If it is high summer, the daisies and harebells decorate the fields, accompanied by a large variety of herbs and grasses. A bit earlier, in June, the groundnut flowers lie like a bridal veil over the pastures . If you come in May, the whole area is coloured by pilewort, cuckoo bitter cress, early purple orchid and flowering primrose.

With its mild winters along the coast and the long, humid and relatively warm summers, Ånulgo lies in the middle of the fjord with better than average conditions for plant growth. Originally, the island was covered with dense pine forest. One can still find strips with large pine trees and giant oak trees, and one locality with huge basswood trees.

In 1909 there was an attempt to protect one particular area under the forestry association's administration. The conflict between protecting or planting new trees lasted for a long time. First in 1967, a boundary for the protected area was proposed, along the southeast side of the island. In the meantime, a number of foreign tree types were planted on the island.

The dark, dense spruce forest threatened to outcompete the original pine forest. During later years, much of the planted forest was cut down, and it is unknown whether or not it is possible to return the forest to its pristine state. It will in any case take a long time to heal the sores made by the forestry machines. And it will be one difficult job to remove the common spruce, Sitka spruce, silver fir, hemlock, lark, beech and sycamore maple, that today occupy their niches on Ånulgo. Seed plants are continually coming up everywhere, also in the protected area.

Ånulgo is perhaps best known for its gigantic holly trees and ivy. The biggest ivy in all of Norway used to grow here, but early in the 1950s it gave way to the injuries inflicted by the torpedo assaults during a marine battle that took place in April of 1940. Today, there is a new ivy plant on the verge of overtaking the old giant.

The lush pine forest under Storhaugen hill has attracted international interest. You can wander in the underbrush of 5-8 metre-high juniper, holly and hazel, and experience how small they seem in comparison to the gigantic pine trees that tower overhead. Ivy climbs up the trunks of the pine trees, and woodbind, dogrose and guelder rose form bushes over an exuberant mixture of primrose, bear's garlic and several other coastal plants. By Vedavika bay, one finds the easternmost occurrence of purple heather in the county.

Today there are only a few year-round residents on Ånuglo, and large parts of the island are becoming overgrown. This phenomenon is favourable for the animal life; Ånuglo has perhaps a more varied fauna today than at any time in the 1900s. The nature preserve on the south side of the island is home to the greatest diversity of animal life, even though it was originally erected to protect the plant life. An equally important area, especially for birds, is the lush deciduous forest that extends from the south end of the preserve up toward the farming district. Many of the trees show clear signs of woodpecker activity. There are at least three species of woodpecker on Ånuglo, of which the white-backed woodpecker is the most common. This species has quite a large territory, and therefore is not always easy to spot.

One finds also black grouse and capercaillie both here and on the neighbour islands. Sometimes goshawk can be seen hunting for its prey. In sunny places adders can be quite numerous.

Professor Sernander (with his back turned) and a student measure the diameter of the large ivy that grows on Ånuglo.

Lily of the valley in calciferous pine forest. (Bjørn Moe)