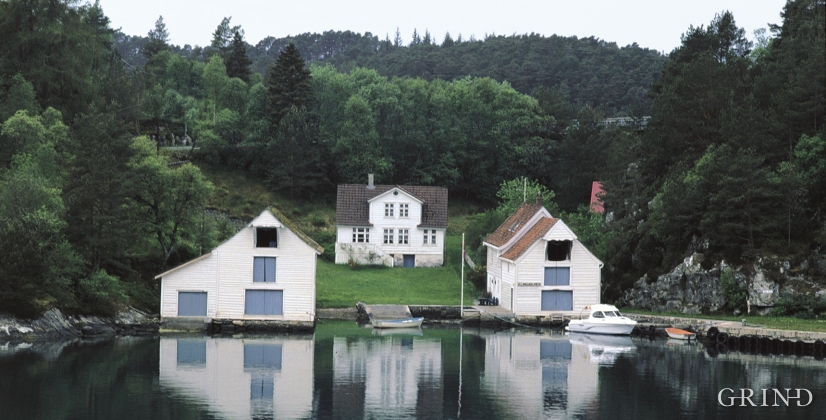 The large warehouses/boathouses at Klinkholmen were central to the trading business. This is a newer trading centre; the oldest privileged centre was in Kubbervik.(Svein Nord).

Kubbervik, or Vikjo as it was known colloquially, must have been established as a trading post under the farm of Håland some time around 1600. The reason for this was probably the thriving trade on Scotland. Every year ships from the islands in the west came to buy lumber in Bårsund. Vikjo was the harbour in use, as the place is ideally situated on the route through Bårsund, the sound between Reksteren and Tysnesøy.

As late as 1706 there were Scots in the harbour in Bårsund. A Scottish ship that was in the process of entering the harbour was taken by a sudden gust of wind and went down. Around 1710 this trade came to an end, but the later land users in Vikjo were involved in both small illegal trading and sale of liquor, sources tell us.

A new era was about to begin. The man from Tysnes, Rasmus Waage, bought Klinkholmen, which belonged to Kubbervik in 1859, an islet with a settlement some place outside the old trading post from the 1600s. “Klinkjen” was an ambitious and motivated man. He cultivated the islet, built good houses both for people and animals, and not least for the trading business he established here, with shop, bakery, steamship agency, shipping, herring and fish trading and salting. He was particularly successful in the fisheries and herring trade in the north of Norway. He removed the earth from all rocks and slopes to make them suitable for drying fish in large quantities. In 1887 he travelled to Brandasundet in Fitjar and expanded the trading business there. His descendants ran trading at Klinkholmen up until 1940. In time both post office and telephone station were established here also. The businesses were finally closed down in 1955-57.