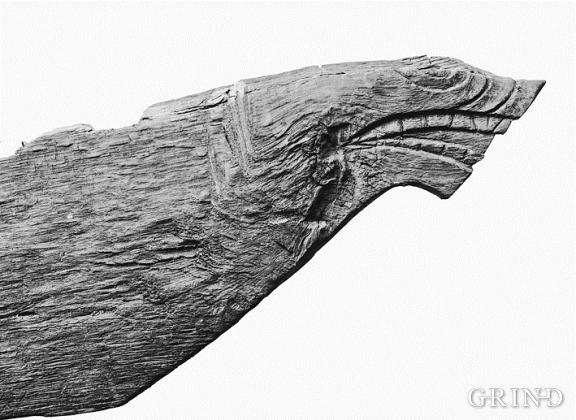 During work on a road at Dalland in 1948 scraps of wood with carvings on were found in a bog. Most of them were thrown away, but one piece was sent to the Historic Museum in Bergen. It turned out to be a boat bow made of oak, where the end was formed as the head of an animal with carved mouth and teeth.

The find was reported in the papers, and some days later another similar find was sent in, also from Tysnes. This was an oak log, found ten years previously a metre deep in a bog at Midtvåge. The end is a clearly carved animal head with a gaping mouth and sharp teeth. Judging from the style the carvings are probably from Viking Times or early Middle Ages.

It is likely that the logs have been placed in the bogs before they were finished. Whether the reason for this has been an expression of offering or from other causes is difficult to say. We know that boat builders in older times often placed their blanks in water or a bog to keep the wood fresh. It is possible that the carvings that were unearthed at Dalland and Midtvåge are such thousand year old pieces.