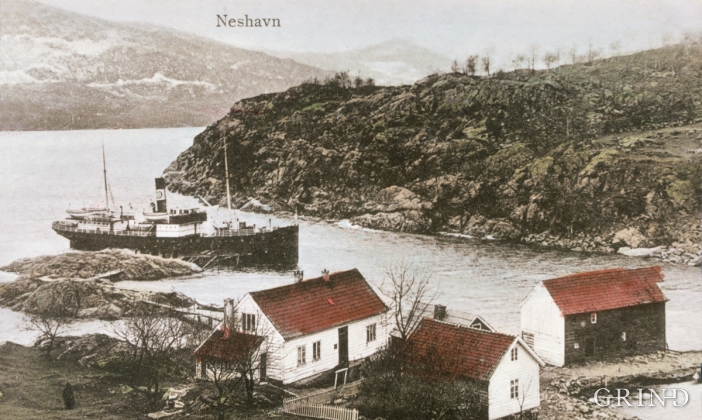 Neshamn must be an ancient place for meeting and spending the night for travellers. The place blossomed in connection with the times of economic expansion in the 1500s, which to a large extent was linked to the Scottish trade at this time. Neshamn was a loading place for Scottish ships for two hundred years, up to the middle of the 1700s.

The hostelry places were officially approved lodgings for travellers that were in possession of a licence or “Letter of Privilege”. The last privileged innkeeper died in 1861, and the lodging business came to an end shortly after that.

In other respects the innkeeper traded with the people in general, while in name it was illegal to keep inn for others than travelling folks. He was involved in farming, fishing, sea husbandry, salting business, fish buying and shipping agency.

Parts of the main building that is left at Neshamn can be traced back to the middle of 1700, while the store was probably built around 1870.

From the middle of 1850 Neshamn came to play a role mainly in the local community, with store, bakery, shipping agency and post office. But the storekeepers kept running the old lodging businesses, such as sea husbandry, salting and shipping agency. In 1973 the country store, post and shipping agency were closed down and the place was in many ways “abandoned”.

As a curiosity it may be mentioned that Storsøya (administered under Nordhuglo) functioned as a branch of Neshamn in the middle of the 1700s. The place took care of boat travellers who came through the Laukhamarsundet from Skånevik, Etne and Fjelberg on their town trips.