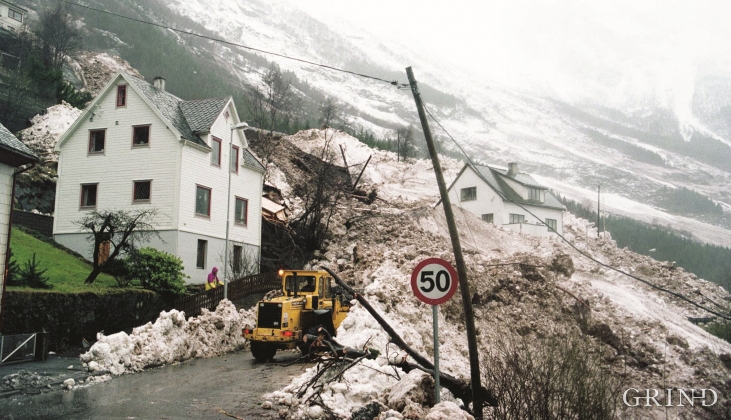 On the 17th of January, 1993, the area between the towns of Odda and Eitrheimsneset were struck by a giant avalanche. One person was killed, and there was a lot of material damage.

This area has been struck by landslides and avalanches many times before. Most of the avalanches start in the steep overhang under Ruklenuten, at about 1300 metres altitude. The avalanches from Ruklenuten have been named Klungersetskreda, Helgesliskreda, Breiskreda, Røynhammarskreda, Rindaskreda and Juvaskreda ("skred" means "slide") – from south toward north. Often it is not the snow that creates most damage, but the strong winds that build up in front of the avalanche.

The Klungersetskreda avalanche in Odda in 1993 was the most destructive. The avalanche was recorded by video, and the dramatic event was shown on television around the world. But also from Tokheimsnuten, two avalanches let go the same year: Helleskreda and Husaskreda.

After the avalanche winter of 1993, work was initiated to plan and put in place avalanche and landslide protection. The work was finished in 1994 and cost 40 million crowns. The avalanche protection was built as large earthen walls and earthen pyramids. They were meant to stop any avalanches at Kalvanes and Egne Hjem before they could reach the settlements or the highway. At Tokheim a big cement wall was built, to lead an eventual avalanche out to the sides, away from the houses. At Eitrheim, where the avalanche followed a river gulley, the river bed is now sunken. A clay wall has been built along the edge of the river.

There have not been any more large avalanches after 1993 that have caused damage to the settlements in the Odda area. The protective measures have done a good job so far, but they have not yet been tested against an avalanche as big as that in 1993.

How an avalanche is formed

Loose snow avalanches start at a point high up on the mountain side. If the terrain does not stop it, such an avalanche will spread out like an expanding cone. The starting point can be a steep snowdrift that breaks loose because of its own weight, often after a period of much precipitation and snow drifting due to wind.

The slope of the terrain is important for determining the avalanche speed. If the slope angle is less than 28 degrees, it is extremely unlikely that an avalanche will ever be triggered. On mountain sides with more than a 50-degree slope, the snow will most likely slide downhill as quickly as it falls. It is therefore valley- and mountainsides with slopes between 28 and 50 degrees that are susceptible to avalanches. There are many such areas in Hordaland.

Loose snow avalanches that start high up in passes and gorges are quite common in Hardanger. These avalanches follow river courses and tend to spread out on the river fans by the fjord. Most often, they don't cause a lot of damage, since the risk of avalanche is well known in these villages.

Avalanches disturb the vegetation. Forest cannot grow in such places, and neither can bushes, whereas heather grows well. There are many treeless avalanche paths along Sørfjorden. The plants that survive the avalanches get good light conditions and favourable temperatures. Since the erosion from the avalanches result in patchy vegetation, there is little competition from other plants.

Many plants that we know from the roadside grow well in such areas. These two niches resemble one another. Snow clearing and removal, trampling and driving cause patchy and open ground also along the roadside, with little competition between species. It is understandable that the herbs mugwort, fireweed, common toadflax and several species of pea originally grew in avalanche fields, and that they migrated from there to spread along the roadsides. Avalanche paths at Røldal.