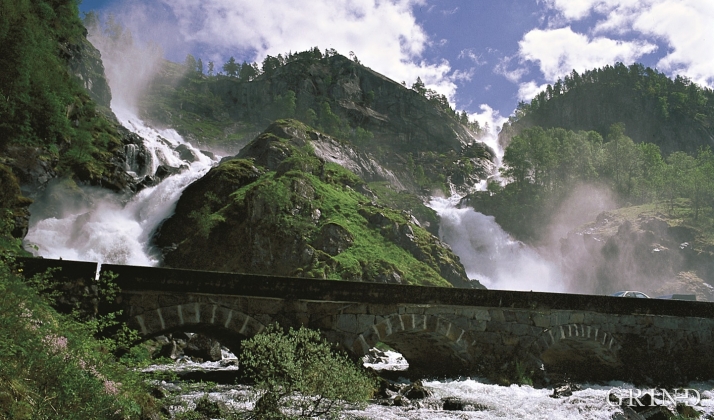 Låtefossen waterfall, or more correctly, waterfalls, plunge 165 metres down the mountainside, 51 of them in free fall - to the enchantment of the many tourists along the highway below. The spectacular view is mainly seen from the stage of the Storelvi river in the valley below the waterfall.

Along Highway 13, the Storelvi river runs in a valley trending south-north. The valley follows a fault zone with many fractures and loose bedrock. It is not surprising that plans are being considered to lay the highway in a tunnel along this stretch of road. Rockfalls are common here. Scree slopes along both sides of the valley and boulders on the river plain and even out into the river, are testimony to unstable mountainsides above. One of the tunnels at Lake Sandvinvatnet below the Storelvi River is aptly called "Lausasteinstunnelen", which means "loose stone tunnel".

Before the ice ages, this valley was not deep. Together with the other rivers, the Storelvi reached the sea right out by the coast, where Hardangerfjord now opens to the sea. During the ice ages the glaciers carved out the fjords - and Storelvi got a much shorter route down to the sea. The river became comparatively steeper. The broken-up mountainside made it easier for the ice to carve extra deeply into the terrain. Therefore, it has been possible for the ice to even out the river profile, especially below Steinaberg bridge, where the river gradually changes from having an even strength, to floating silently down toward Lake Sandvinvatnet. It is different with the side river Austdøla which gets its water from Lake Reinsnosvatnet, and further down, Lake Låtevatnet: with harder bedrock and less water in the river bed, the carving strength is weaker than in the Storelvi. Låtefossen waterfall(s) is the result. The two nearly same-sized waterfalls come from the same lake. This is because there were two discharge channels at about the same height. At some time far in the geological future, these waterfalls will be gone - Austdøla valley will have accommodated to the course that the Storelvi River has so effectively carved out. But, as of today, the Austdøla is poorly-accommodated.