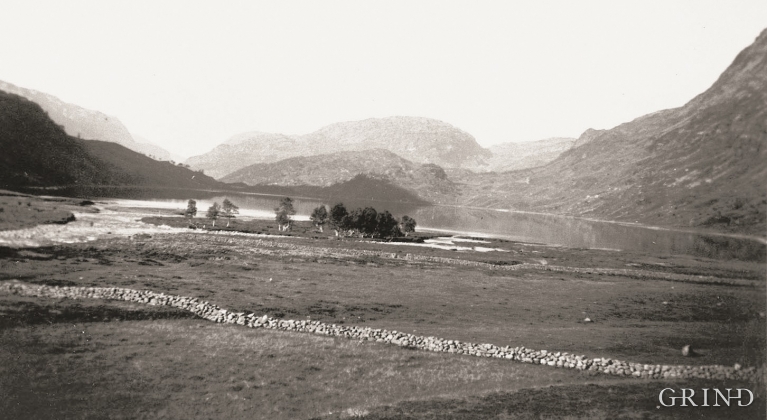 From Valldalen, in front of the old Valdalsæter tourist cabin, which was moved further into the valley after the damming of the lake. There was also a farm here in olden times with 250 000 m² of growing fields. (Norsk Vasskraft- og Industristadmuseum 1-03708)

MOUNTAIN-FARM VALLEY THAT GOT DAMMED UP

Valldalen or Valdalen, the name that the locals used in past times, had been a permanent settlement for a long time, and later the biggest mountain-farm valley in western Norway. Since that time there have been many changes: Most of the fields are no longer in use. Bjørkeskogen, a birch forest that had grown in the valley for thousands of years, took more and more over. And in the valley bottom, the Valldals dam now keeps the artificially large Valldalsvatnet Lake in place.

The valley bottom became ice-free 10 000 years ago. Birch was the most common tree type for the first 2000-3000 years. In the warm period that followed, pine took over. Thereafter came a period with much grey alder. Since the Iron Age, birch has again been the most important tree type in the valley.

Studies of the vegetation history suggests that people lived in Valldalen already in the Stone Age. The earliest settlement was, as far as is known, at Ullsheller, on the east side of the original Lake Valldalsvatnet. In the latter part of the Bronze Age (about 3000 years ago) there were both farm animals and grain fields here. It is thought that people stopped growing grain in Valldalen before the Iron Age began, perhaps because the climate became colder. There have probably been animals here as long as people have lived in the valley, with the last leaving just after World War II.

During the past century, before the damming of the lake, Valldalen was used for summer grazing, with 18 mountain farms at its busiest. In the 1930s there could be up to 7000 goats and 1000 cows on the mountain farms. Up until the end of the 1950s, there was a cheese factory that produced goat cheese, down in Austmannalia, where the road turns in toward Valldalen. Later, a new cheese factory was built nearer Røldal. There are many fewer goats and cows in the valley today than previously. Old pasture land has therefore become overgrown in with birch forest.

The basis for the lush vegetation is a thick cover of moraine sediments, with much phyllite from the bedrock. The phyllite erodes easily and gives off important plant nutrients. Good availability of calcium gives good growing conditions for many finicky species, especially on the eastern and northern sides of the valley, including among others mountain avens, moss campion, dwarf willow, purple saxifrage and yellow saxifrage.

Valldalen lies in the northeasterly part of the Suldals water system, which runs out into Boknafjord by Sand in Fyfylke, as the Suldalslågen river. The southwesterly part of the Hardangervidda Plateau is thus drained through this valley system, and these water masses form an important basis for the hydroelectric power development in Røldal-Suldal. The 90 metre high Valldals dam was built in the 1960s. The original shores and the original cultural landscape were swallowed up by the reservoir for the power station. Most of the mountain farms are flooded most of the year, and always in summer.

The birch spreads at Brytingsstølen mountain farm because there are no longer any farm animals grazing here. (Svein Nord)

When the lake is full, the large water surface influences the climate along the new coastline. The warming of such a large quantity of cold meltwater in summer and the cooling in autumn go slowly. On warm, still summer days, the air currents that flow in over land from the cold water surface can be 2–3 °C colder than the air over land. On clear, windstill autumn nights it is just the opposite. Then, an air current in over land from the water may raise the temperature 3–4 °C, and thereby reduce the danger of nightfrost. Along the new coastline the growing season also lasts a little longer into the autumn than before the lake was dammed.

The most noticeable and visible effect of the regulation is nonetheless down in Røldal in winter, when Lake Røldalsvatnet is ice-covered. When it is very cold, mist forms over the open channel from the power station discharge. Sometimes this mist spreads out over the flat land in the town. The sight of trees and other objects covered in a thick icy frost can also be attributed to the influence of this open channel.