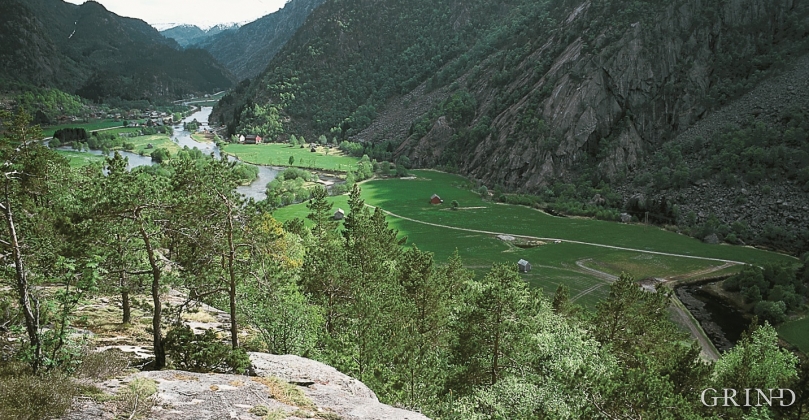 BIRDLIFE ON THE RIVER PLAIN

It is not easy to know what the conditions are at the nesting grounds when one is far away in winter - perhaps in France or the Mediterranean. At Sandvin the birds who arrive in the country a week too early, have to wait patiently for the snow in the mountains or on the fields to melt.

Lake Sandvinvatnet and the river plain just inward from the lake are among very few low-lying freshwater areas in the district. Since the water and the river plain also are centrally located in the valley, many migrating birds use these wetlands as a resting place on their migrations.

When the Lapwing comes to Odda in March, it likes to stop at Sandvin. This is also the case for the Plover and other birds who nest on Hardangervidda plateau. The water in the Opo River is cold and not especially nutrient-rich, but the river carries a continuous supply of organic material from a larger area. Much of the nutrients collect at the water's edge, and the birds come here regularly to feed.

Similarly, the fields and cut meadows are attractive areas for birds on their autumn migrations. When flocks of Fieldfares and Redwings have eaten up the supply of berries in the mountains, they stop off for a while at Sandvin to feed on worms or strip the rowanberry tree of its berries. They need their Norwegian menu before they cross the North Sea and spend the whole winter in Great Britain or on the Continent.

The 15th of May, 1981, was a red-letter day for the local ornithologist Rune Voie. He went for a walk at Sandvin before his evening shift at Norzink, and had actually not been seeking anything more from his tour than some fresh air. Nonetheless, he had his camera along, and when an unknown vibrantly coloured bird landed right in front of him, he took some good pictures. It later became clear that this was the very first ever spotting of the White-throated Robin in Norway - and also one of the first in all of Europe. The nearest to us this species nests is in the high mountains of Turkey.