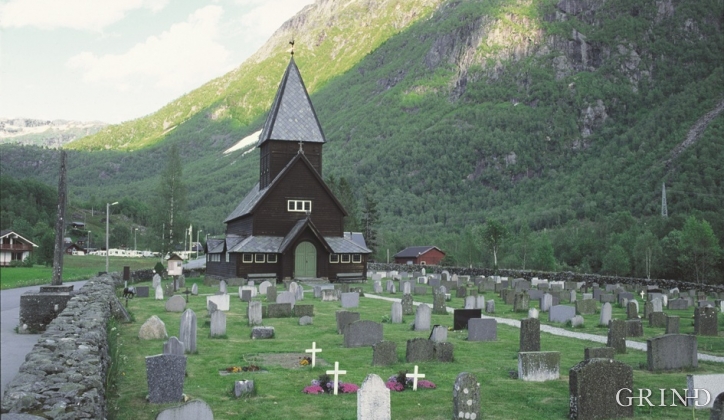 The stave church in Røldal

The stave church in Røldal was one of the key pilgrimage churches in West Norway. The church was probably built between 1250 and 1350, and in the high Middle Ages Røldal was the most important destination for pilgrims in the country beside the Nidaros cathedral. It was the crucifix that attracted people to midnight mass on midsummer night. That was when it excreted its miraculous sweat.

The medieval stave church was extended to the west in 1844. The western part of the nave and the church vestibule is thus from more recent times. The original stave church had one nave and was surrounded by covered passageways. In the restoration of 1912-18 the onion-shaped steeple over the western part of the nave and the passageways around the building were re-constructed. Structurally Røldal stave church is different from other stave churches in that the longitudinal walls are made up of sections, thus there are interim staves between the corner staves. Also, the wall beams are jointed into the staves. The normal construction is for the staves to lie on top of the beams. The staves are finely finished with an axe, a special surface treatment that is also known from Lagmannsstova at Aga in Ullensvang.

In 1638 the church was decorated with roses and vines. The décor in the chancel ceiling is the best preserved décor, the rest was heavily restored in 1917, and the ceiling décor in the nave is new. Both the altarpiece and the pulpit have been painted by Gottfried Hendtzchell from Breslau in Schlesien in 1627-29.

Apostle martyrdom – a well-known motif in the church art of the Middle Ages. (Egil Korsnes).

Above the chancel archway in the church hangs the crucifix, a work from the 13th C, fashioned in oak. The style is the high Gothic – a beautiful Christ portrait.

Legend has it that the crucifix was found by a blind man while he was out on Korsfjorden fishing together with a young boy. After a while he caught something heavy, and when he managed to raise it, a Christ picture appeared in the sea. They tried to lift it into the boat, but it was too heavy. The man struggled so long that sweat poured from his brow into his eyes. He had to let go and wiped his eyes. He then suddenly had his sight restored. He was so elated that for a while he forgot both the Christ picture and the fishing. But after having reconsidered, he understood that a miracle had happened to him. He resumed struggling to get the picture into his boat. He wowed to donate it to a church and mentioned one after the other. But the picture remained just as heavy. Only when he mentioned Røldal church did the crucifix lighten. Happy, the man rowed to the shore and later on he and a whole delegation brought it to Røldal church.

The faith in the miraculous power of the crucifix remained strong through many hundred years, and illegal catholic masses at midsummer’s night were held until the beginning of 1800.

The economic base in the Røldal settlement has been agriculture, cattle breeding and the resources in outlying areas. However this mountain settlement has never been a rich agricultural area. For a long time the population was around 600 inhabitants. In bad years, when the snow already settled on the green fields, the Røldal inhabitants had to set out on begging trips to neighbouring communities. After the advent of the potato into the household, the settlement was expanded, and previously uncultivated outlying fields became cultivated, such as Valldalen. At one time the population counted as many as 1200 persons, before the America fever took hold. Today Røldal has reverted to its historic population number of 600.

Culturally and in relation to communications Røldal has in former times had close connections with Suldal and the rural communities in Ryfylke. Up to 1963 Røldal belonged under Stavanger diocese.

The Røldal market goes back to prehistoric times. Røldal was favourably situated for exchange of goods between east, west and south. Goods from the sea, such as salt, hops and dried fish were exchanged with inland goods like iron and leather. The Røldal market was one of the two great markets around the Hardanger plateau, the other one was at Kaupang in Kvisla in Hol municipality. From the iron producing communities in Telemark knife blades and scythes were sent westwards, but otherwise the Røldal market was an important cattle and horse-trading market - the last Røldal market was held in 1809.