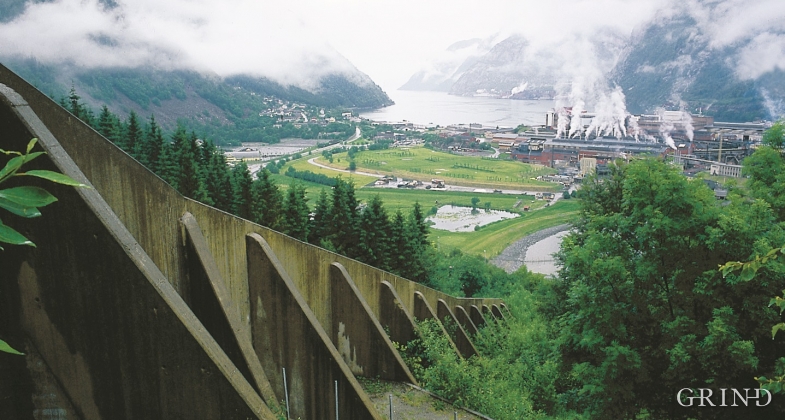 Eitrheimsneset with "The Zinc" seen from Tokheim. Parts of Eitreheimsvågen are filled in and transformed into a golf course. The large cement walls in the foreground were built to lead avalanches out to the sides, away from the houses at Tokheim. (Svein Nord)

In 1908 the new power station in Tyssedal was completed. A/S Tyssefaldene provided power for the carbide and cyanide factory that was built in Odda. This signalled a new era.

The outbreak of war in 1914 chased foreigners home from their holiday. The world war prevented them from returning for many years. In the meantime, Odda became industrialised. Skjeggedalsfossen, one of the greatest attractions for the tourists, was laid into pipes. The carbide factory at the time was without any cleaning facility, and this made its mark on the environment. The hotels started noticing the decline in traffic, and the travel books recorded:

“Odda is picturesque, but is marred by Factory Activity, which has robbed the Landscape of its Attraction”.

The hotel owners took the carbide factory to court for “Inconvenience and Deterioration of Values by its Stink and Smoke”. One hotel owner won through with his case, and when the other hotel owners won compensation in the beginning of the 1920s, the factory was bankrupt. The opening of the Bergen railway in 1909 was another reason why the travelling crowd now avoided Odda. The tourist place had become an industrial place. Today the story of the Odda smelting plant makes it a possible candidate for becoming a UNESCO world heritage site.

Industrial pollution of air and water

Industrial expansion in Odda began in 1906. This laid the foundation for a dramatic transition for the local community and environment. The area that was known out in Europe for its magnificent nature, glaciers, waterfalls and clean air, instantly lost its attraction as a tourist destination.

Air pollution from the smelting ovens became much worse than most people had imagined beforehand. The high mountains surrounding the fjords protected against the wind from most directions. Therefore, the polluted air remained in the valley. It is worst in periods with cold and clear weather. Then, dense, cold air seeps down the slopes of the fjord from the mountains and glaciers, forming a kind of lid that seals in the polluted air nearest the ground., more than at other times of year.

But, it is not only the air that was polluted: Garbage that didn't make it to the waste disposal sites or get burned into the air was dumped into the sea. In 1974 a local environmental committee declared that the water in the fjord, mussels and fish were polluted, and the sea bottom innermost in the fjord was essentially lifeless. Cultured soil and plant produce from the inner part of Sørfjord had high levels of the heavy metals mercury, lead, cadmium, copper and fluoride.

The greatest pollution of the fjord came from the dumping of heavy metals in the form of sludge (jarosite) from Norzink, but also DNN Aluminium and the Odda Smelteverk used the sea as a dumping place for environmental pollutants. In the 1970s Norzink dumped nearly 600 tonnes per day. Of this, over 10 tonnes were heavy metals, mostly zinc and lead.

In 1979, the national environmental authorities declared Sørfjorden one of the most polluted marine areas in the world. The same year a national monitoring programme was started to keep watch over the pollution. Cement dams were built outside of the old disposal sites in Eitrheimsvågen. A surface cover was laid over the seafloor and thereafter covered with sediment deposits. The first repository for disposal of heavy metal-laden sludge was completed in 1986. Norzinc was then required to build a new waste repository roughly every 14 months. The stone deposits were dumped out at sea in places where they would not run the risk of triggering an underwater slide. With the exception of infilling when the Ullensvang Hotel was extended in 2000, there has not been a market for these stone deposits. The black lime - which is a heavy metal-containing waste product from the smelting process – is now rinsed and recycled. This by-product is used by farmers at Voss and other places to accelerate the snow melting in spring, while at the same time adding calcium to the soil. The lime also helps accelerate snow melting on roads that are closed in winter, among others, Route 7 over Handangervidda Plateau.

The air quality today is much better than previously, but traces of pollution will be present for some decades yet. At places that were exposed to much smoke emission, big ecological changes are observed. But, nature took back what it lost: new pine trees grew up where the old ones had died. And the pollution-sensitive lichens have it better now than they have for a long time - even though it takes a long time to gain back the old growth surfaces. With urban lichen it is a bit different - this species of lichen in fact requires polluted air. Therefore, in Hordaland this species is only known in Odda and Bergen.

Map of the concentration of heavy metals in sediments at the bottom of Sørfjord and Hardangerfjord in 1984. The pollution could be measured all the way to Valevåg in Sveio, 150 Kilometres from Odda. Even though the discharge is now greatly reduced, there are still remains of heavy metals in the sediments. (Jens Skei/Eva Bjørseth)

“The crucible”. One of the ovens at the melting plant. (Helge Sunde)