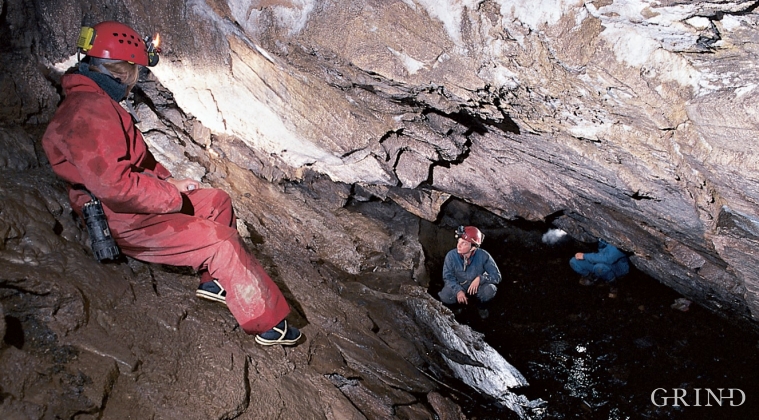 On Gjuvsland, on the southeast side of Varaldsøy Island, lies Gildrehola, the biggest karst-cave in Hordaland. The cave, which is about 50 metres long, has been known for a long time, at least from the 1800s. The stream that disappears down into the cave runs into a water trap, and from there some hundred metres underground to a small spring further down in the hillside.

Where there is calcium carbonate-rich bedrock, rainwater dissolves away the mountainside. Karst is a common name for such dissolved carbonate deposits. Channel-shaped fissures in the bedrock, so-called "lapis", widen the cracks and rounded pits are the result. Downwards in the bedrock the groundwater dissolves the rock around the cracks and forms caves, and the water may come out at the surface through open springs. If the water-level sinks, the caverns will dry out, such that we can go inside them. In such dried out caves as this, drip-stones are formed, known as "stalactites", that hang from the ceiling, and stalagmites that rise up from the ground. Drip-stones are not very common in Norway, because it is too cold. The study of caves is called "caveology", and in many places cave-climbing ("grotting") is a popular sport.

Both along the southeast side, as here at Skjelnessodden, and the northwest side of Varaldsøy Island, we can see layers of altered calcium carbonate, marble, in the mountainside. This is believed to be the same zone as that which is folded and hangs together at depth. The marble at Varaldsøy Island is the most northerly occurrence of marble of any size in the Sunnhordland - Hardanger area. The rock has been fratured many places near Skjelnesodden. The stripes in the bedrock arise from differential dissolution of the marble layers.