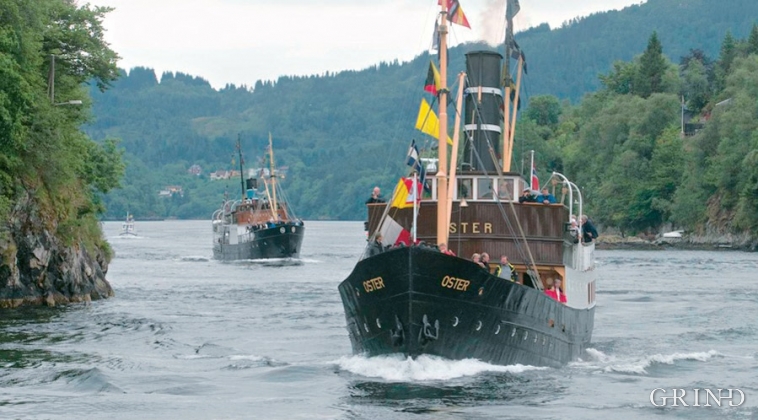 The hostelry in Alverstraumen was in operation in 1660, but we do not know for certain how old the place really is. From the time of the sagas the inner shipping lane towards the north has passed through Alverstraumen. Here passed kings and war fleets, bishops and merchants.

There might be many good reasons to put a guesthouse here. The current may be as fast as a river, thus making it almost impossible to pass through in a small craft. Here were sailing sloops from North Norway, coming to the meeting of boats in Bergen, here the herring fleet left for, and returned, from the herring fisheries at Kinn in former centuries, and here sailing sloops from Sognefjord loaded with wood and farm merchandise, were moored up waiting on fair winds.

In the court annals of 1675 the owner, Anna Tomasdatter, is mentioned, and in 1682 it was said about her that: “Ane, sal. Abel Mogensen, guesthouse owner, with her daughter and a farm maid, live in the direst poverty”. Later on, the place must have become more lucrative, and it was common for both state officials and other travellers to stop and to eat and lodge here. On the trip of king Christian VI in 1733 there was a transport change in Alverstraumen.

“Here (in Kjelstraumen) fresh transport was taken on to Alverstraumen, 2 miles where 24 of Bergen town’s captains with their leader (dressed in white damask Riding Frock, lined with Couleur de Rose taffeta, black velvet Trousers and pearl-coloured silk Stockings, yellow–braded Hats) arrived and requested that they must row His Majesty to Bergen, which was allowed them, thus they brought His Majesty to Bergen, 2 miles, towards 11:30 p.m.”

Alverstraumen was a favoured place for excursions for prosperous Bergen families in the 1800s; they travelled by freight boats, and later on by the steamship. The guesthouse place gradually turned into a hotel, but in 1920 the hotel burned to the ground. Later on, Chr. Bjelland bought the entire place and built a cannery there.