The geology along Oster Fjord and further eastward, in cross-section and on the surface. (Haakon Fossen)

WHEN THE BERGEN ARCS SANK DOWN

The Bergen Arcs have an unusually sharp boundary to the bedrock in the east. Geologists think that this was caused by movements in the earth's crust during the Devonian Period. Then, the Bergen Arcs on the Lindås peninsula sank a whole 10 kilometres in relation to the Precambrian basement gneisses on the east side of Fens Fjord and Aust Fjord.

The zones of movement follow these fjords. On land, these zones can be observed in the Ostereid and Bjørsvik Bay areas.

The dramatic changes started about 400 million years ago, when the rocks lay at great depth under the earth's crust. At this depth it was so hot that the rock behaved like a viscous dough during the movements. Such zones of movement are called "shear zones" in geological terms; the name of this zone is the "Bergen Arcs shear zone". When the rock was still pliable, it flowed out over what is now the Lindås peninsula, and it sank downwards over millions of years in relation to the basement bedrock to the east.

Through all this time, layer upon layer was removed by the destructive forces in the area, simultaneously as the movements between the Lindås peninsula and the land to the east continued. Through this process, the rock types that originally lay deep down under the crust, came up to shallower depths, so that the temperatures in these rocks cooled. The bedrock therefore grew steadily harder, and that which had earlier been a broad and ductile shear zone, became a narrow and brittle fault. This is how the Fensfjord Fault was formed; the last phase of movement in the region occurred along this fault. Ground up bedrock, which resulted from the faulting, together with the calcite- and quartz crystals, can be found along the sides of the valley north of Bjørsvik. The fault is clearly visible in the landscape as the narrow depression from Bjørsvik over to Stallbotnen.

Movements in the earth's crust can occur when the bedrock gets broken up into blocks, separated off by zones of movement. If the bedrock is broken completely off in such a zone, the zone is a fault. If the movement occurs deep down under the crust, however, the bedrock will be stretched like a dough to form a shear zone.

The bedrock on the Lindås peninsula lies in a huge trough shape, or synform. This mighty geological structure forms a boundary with the Bergen Arcs shear zone to the east. Along the European Highway from Knarvik to a ways past Leknes, the gneiss layers dip toward the east (1 under and map over), and they form characteristic ridges and valleys. Further along the road toward Eikangervågen, the bedrock lies much flatter (2), showing up clearly in the low terrain. In this area the bottom of the big trough is passed. Further to the east, toward Romarheim, the bedrock goes over to rocks which dip to the west (3). "Lindås Trough" was formed when the layers of bedrock got pressed together about 400 million years ago. It is possible that this trough-formation is directly connected to the movements which occurred along the Bergen Arcs Shear Zone. 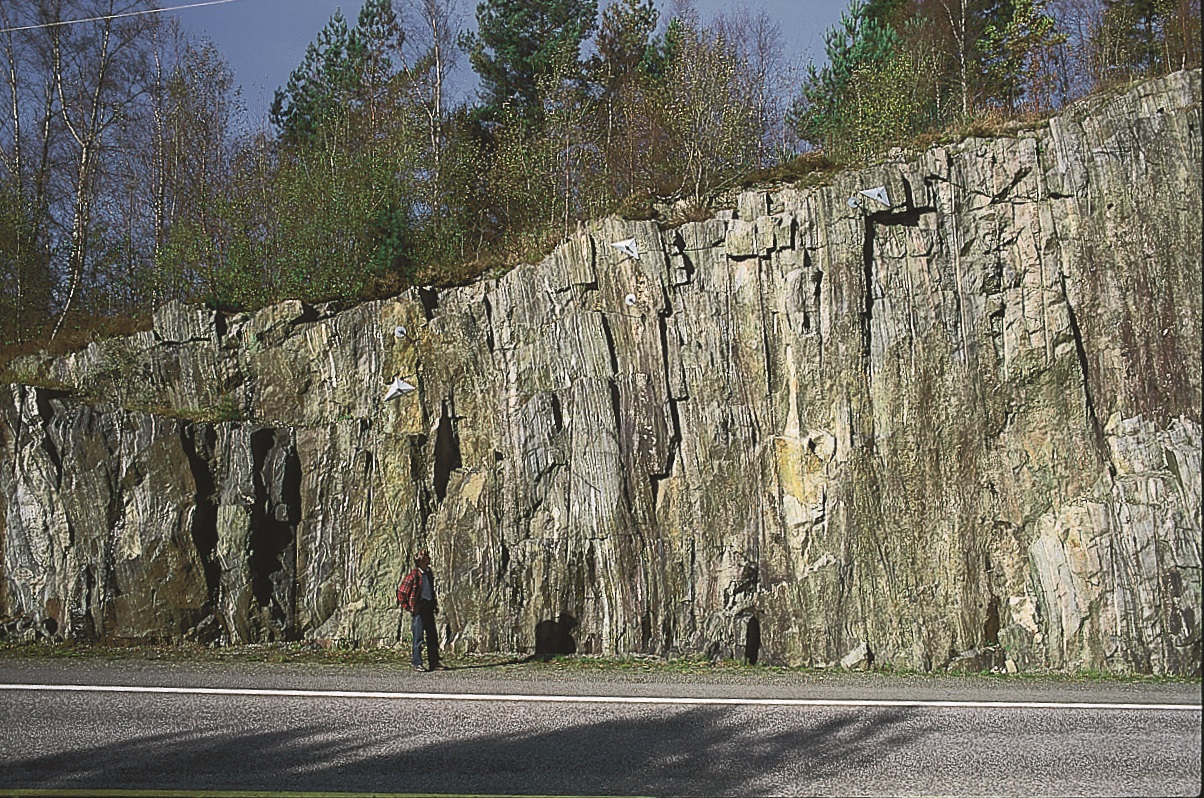 (1) Along the European Highway from Knarvik to a ways past Leknes, the gneiss layers dip toward the east, and they form characteristic ridges and valleys. (Svein Nord) 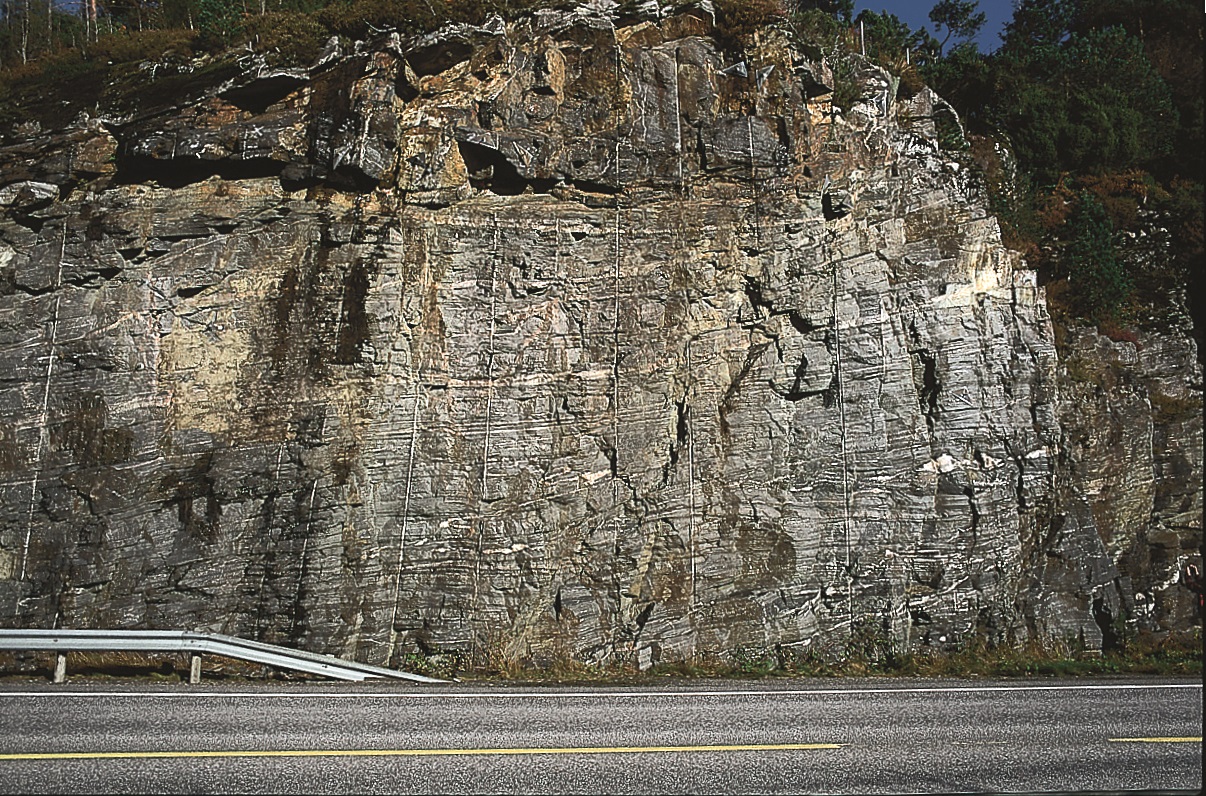 (2) Further along the road toward Eikangervågen, the bedrock lies much flatter, showing up clearly in the low terrain. In this area the bottom of the big trough is passed. (Svein Nord) 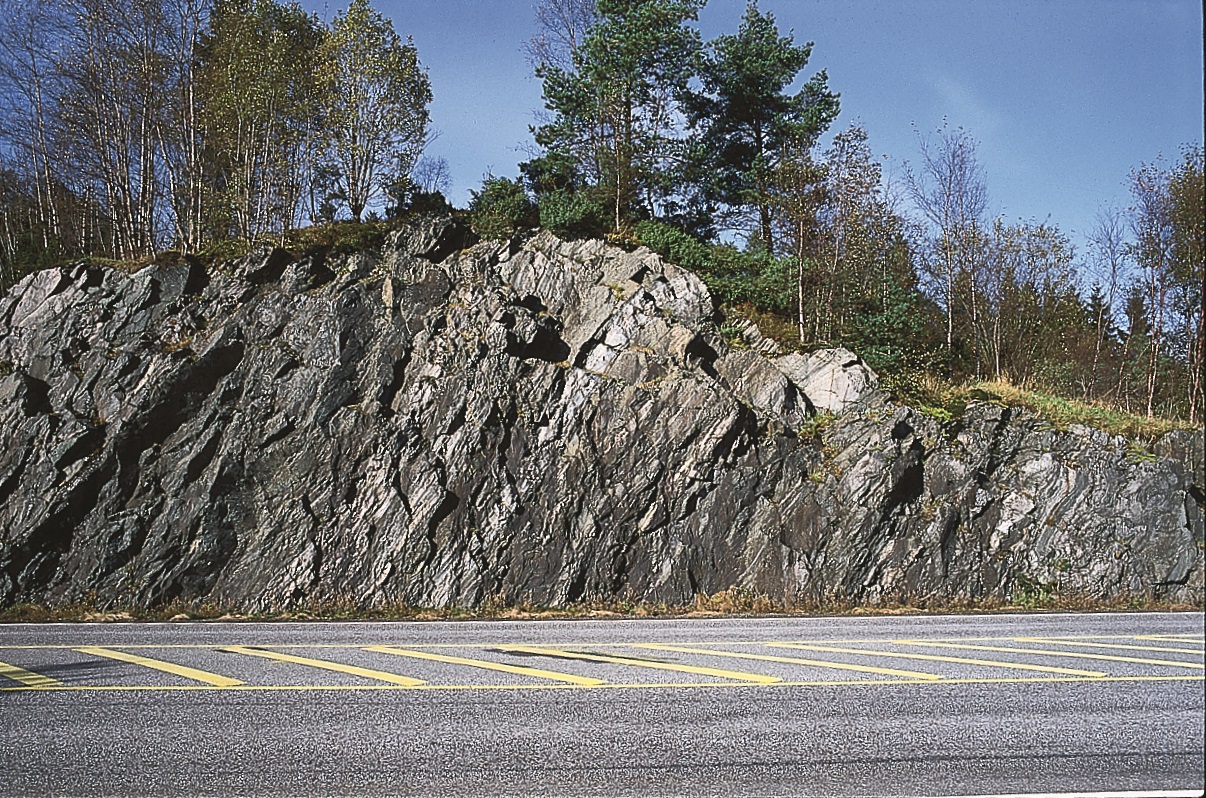 (3) Further to the east, toward Romarheim, the bedrock goes over to rocks which dip to the west. (Svein Nord)