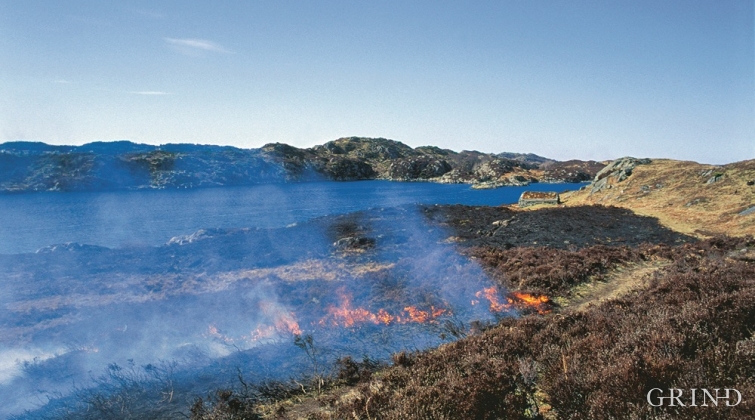 Burning off of the heather on Lygra (Svein Nord).

The heath landscape on outer Lygra, Utluro and Lurekalven will in future become part of a landscape protection area, to be maintained through traditional activities with year-round outdoor sheep, grazing and burning. The West Norwegian heath country belongs to a large North Atlantic coastal landscape stretching from the Bay of Biscay to the Lofoten islands.

The farm Lygra lies on an island in Lurefjorden – a beautiful and well maintained coastal landscape with views of the fjord on both sides. The farm units and the fields are well built and well maintained stone buildings that form a silhouette on the horizon. The simple dry dikes lie like works of art in the landscape, a witness to craftsmanship and a sure eye. On Lygra there are good farms and skilled farmers, a farming community with rich traces of agriculture through the millennia.

Places of settlements along the coast inform us about the Stone Age hunter’s area, later on came the farmer. Innumerable traces of human activity let us know about the agricultural society: burial mounds, charcoal kilns, strips of unploughed land between the fields, and archaeological finds – this farm has most archaeological finds in the whole of Nordhordland. The finds show that Lygra has been a key farm with wide contacts with the world around as far back as around the year 400. The farm is situated on fertile loose sediment, which has been instrumental in letting the area develop into one of the best agricultural farms in Nordhordland. Lygra belonged to the landed estate of the royal farm at Seim, and saga tradition tells us that court was held at Lygra. In recent centuries the place has been used as military training ground.

The original heather moor landscape in Nordhordland covered about a 25 kilometre-wide belt from Øygarden and Fedje in the west to the conifer forest in Lindås to the east. In the whole of this belt, the winters are so mild and relatively snow-free that the sheep can graze on the heather moors the whole year round. The time that was spared by not having to store food and bedding for the animals, was used instead for fishing.

Inside of the heather moor area, there was nonetheless always a division between the fishing gypsies and the fjord gypsies. Toward the sea in the west, fish were the most important source of income. Toward the fjords in the east, agriculture had more to say about the economy. The heather moors northwest in Lindås are a part of the inner area in a functional and economic sense.

Right up until the 1960s, these moors were so heavily exploited that only small areas were forested, either naturally or through planting. Since the middle of the last century we have seen a large-scale agricultural transition in in western Norway. As a part of this process, the heather moors have almost entirely gone out of production. The decline in grazing has led to a strong increase in juniper, birch, rowan and pine. In addition, there are large areas that have been planted with spruce. There is every indication that, within a few decades, the entire heather moor landscape in Lindås will be overgrown by forest.

Perhaps there will only be two island localities left to show how most of this cultural landscape looked along the coast for 4000 years. Over a ten year period, the heather moor landscape at Lygra and Lurekalven has been extensively restored and made accessible to the public. Thicket and bushes have been removed, and the wild heather moors have been re-created and are being used as they traditionally had been through many hundreds of years. These moors are used for grazing the year around by the traditional Norwegian free-grazing sheep, popularly called the "wild sheep", and the heather is burned off in the spring. In the summer, cows and horses also roam freely on the moors. About 30 old traditional buildings have been renovated. Many of these have been put back into full agricultural production.

The background for these comprehensive conservation measures is a large interdisciplinary research project on the heather moor landscape in Nordhordland in the 1970s. As a result of this research, the Lynghei Centre on Lygra opened in May, 2000.

The Lynghei Centre encompasses an area of about 2 km². The five landowners on Outer Lygra have worked together with the University of Bergen, Hordaland county authorities and the municipality of Lindås to present the coastal farming traditions both in the past and present. There are about 4 kilometres of paths with many exhibition points showing how the coastal resources have been put to use. Of the five farms that are included in the project, three are involved with modern milk production, one is operated according to historical cultural principles based on the 1940s and using older breeds of farm animals, and one is currently undergoing a transition to modern ecological production. The Lynghei Centre also has an information building with an exhibit, film and teaching room, and a café.

The agricultural soil on Lygra is the deepest weathering soil in Hordaland. In modern times, the landowners on Ytre Lygra work together with the Lynghei Centre to operate their farms and manage the landscape. Right: Hannah Wood in the vegetable patch. Lynghei Centre in the background. (Svein Nord)