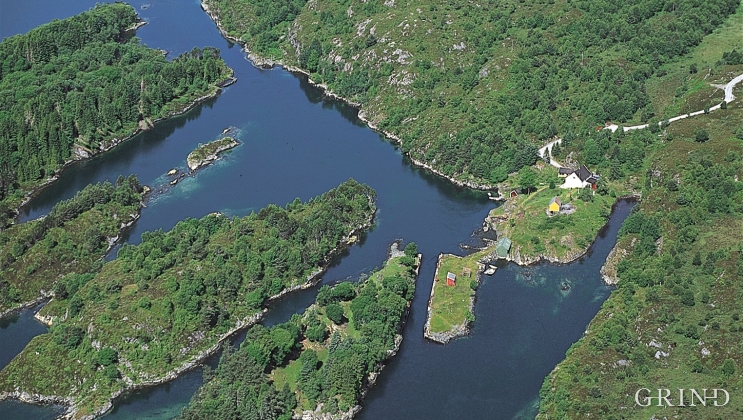 Lindåsosane has several shallow and narrow openings to Lure Fjord. This causes the tides inside to be delayed by ca. 2.5 hours and the height reduced to nearly a quarter of the level in Lure Fjord. Strong tidal currents in the openings sometimes make the passage for boats difficult to execute. The only safe approach goes through Lindåsstraumen Current, south around Spjotøyna Island. Of consideration to the coastal ferries, this run was regulated with locks in 1908. The lock gates have not been in operation since 1963, but the lock is now being renovated. (Helge Sunde)

ANCESTORS FROM THE END OF THE ICE AGE

Both Lure Fjord and Lindåsosane to the inside give good living conditions for rare marine organisms: jellyfish, shellfish and fish. These include animals that migrated in after last the Ice Age, when the sea level was higher. Eventually, as the land rose, some of these populations became isolated.

Lure Fjord and Lindåsosane have shallow sills out toward the open sea. The deepest threshold  in to Lure Fjord lies about 20 metres under the ocean surface, while that from Lure Fjord to Lindåsosane is not more than a couple of metres' depth at the three inlets. Circulation and water exchange in these basins can therefore be poor - in Lindåsosane so poor that the oxygen in the bottom waters often gets used up.

The sills in to Lindåsosane have also restricted to a certain degree the free exchange of living organisms between the isolated fjord systems and its surroundings. When the last Ice Age ended about 11 000 years ago, the sea was about 40 metres higher than today. Then, free exchange was far easier. But, the rising of the land that occurred over the subsequent few thousand years, after the ice that had been depressing the land melted, meant that the exchange with the rest of the world gradually decreased. Scientists call the organisms that are left behind, "relics", which means that they are ancestors of life forms that have become isolated, but which were much more widespread and numerous in the past.

South in Lure Fjord, one finds the world famous type of helmet jellyfish, Periphylla periphylla (picture). This species is found spread throughout most of the world's oceans and in some other Norwegian Fjords, but in Lure Fjord, there is a bigger concentration than usual. The jellyfish, which can live up to 30 years, is phosphorescent, and its glow can be so strong that one can even read a newspaper by its light. The self-lighting enzymes are used today i.e. in cancer research: the enzyme can bind with cancer cells in order to trace spreading, instead of having to use harmful x-ray radiation. The scientists are more enthusiastic than the fisherman - not least, because the jellyfish has out-competed the fish. Its main food appears to be copepods, krill and other crustaceans.

Stocks Hardly any other marine ecosystem in Norway is better studied than the one at Lindåsosene. This is because of the local herring stocks in the three basins. Through 9000 years, the herring has adapted to life in this isolated environment, without especially much contact with herring outside of the fjords and without taking off on any wanderings, like most other herring normally do. The isolation has given these herring a distinction - the stocks at Lindåsosane have fewer vertebrae than other herring. They also grow more slowly and do not grow to quite the same length, so that it is about 15 cm shorter than the North Sea herring. Inside of the fjord system, however, it does go on seasonal wanderings. Year after year it spawns on the inside of this system, and there, new populations emerge.

The sea temperature controls the species distribution; it dies out at temperatures higher than 13-15 ºC. Normally, the Iceland scallop can be found in the northern part of the Atlantic Ocean and Barents Sea. In the Norwegian region it grows mainly in the fjords north of Lofoten and near Jan Mayen, Svalbard and Bear Island. During the Ice Age, the Iceland scallop was also abundant in southern Norway. These Ice Age relics have managed to hang on in Lindåsosane, at a depth of 20 metres and downward, where the temperatures are low enough, even in the summer.

The Iceland Scallop is a northern species of scallop that grows up to 11 centimetres in size. (Stein Mortensen)