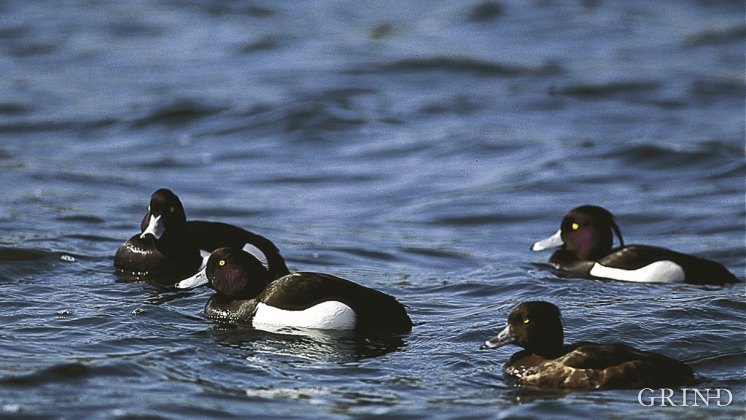 The Bergen area is among the best known overwintering areas for Tufted Ducks in the country. This beautiful duck tends to gather in small flocks in fresh water. When the fresh water freezes, the birds move to shallow areas by the sea. Then, the embayments inside of Eikangervågen are a popular destination. These embayments are shallow, so the ducks can easily find food. There can be flocks of several hundreds of tufted ducks here, in addition to some Goldeneyes and a fair number of Mallards.

In the past, the tufted ducks had a similar gathering place outside of Hopsfossen in Lake Nordåsvatnet. This was discontinued when the new highway to Bergen was built along the edge of the sea. Perhaps it was after the birds left this locality, that the number of over-wintering ducks increased substantially in Eikangervågen.

Interspersed with the tufted ducks, we see flocks of Greater Scaup in periods, and occasionally, Goosander can be seen in these fjords. Further out in the bay one sometimes sees large flocks of Puffins, which can number as many as a couple of thousand individuals. These are the same birds who pluck mussels from the Nordhordland bridge