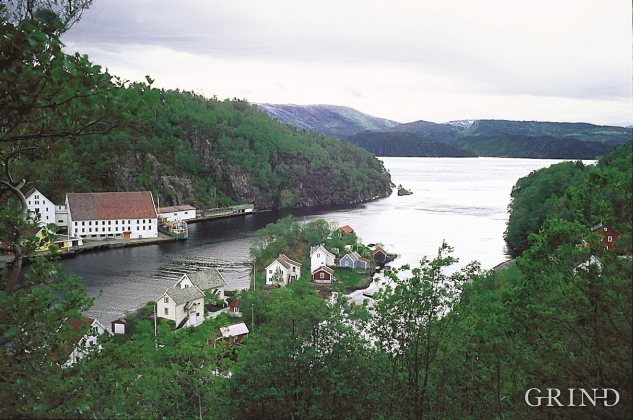 Bjørsvik in Osterfjorden is an industrial settlement that has developed around a single industry in the 1800s. Written sources tell us that in 1673 there was a sash saw in the river that runs between the farms Bjørsvik and Skår. A sawmill was in operation here up until the 1870s.

Waterpower, a good harbour and short distance to Bergen contributed to Bergen merchants setting up a rented mill here as early as the 1850s. In 1861 Fredrik Ludvig Konow bought the water rights and erected three different mills, but it was only when Christian Irgens, who bought the mill works in 1879, that Bjørsvik became a modern commercial mill. The new rye mill was ready in 1884, with steel cylinders that replaced the old millstones and a transport belt for the grain.

Towards the end of the 1800s Bjørsvik was an industrial settlement with store, bakery and houses for the workers. In 1900 the activity was expanded with a new, large mill. This building, which is still intact externally, is 22m high over 7 storeys – probably one of the highest wooden buildings in North Europe. The cannery, which took over after the end of the milling business, which came to an end in 1939, was closed down in the 1980s.

The Opera House in Bjørvika (Oslo) cost billions. But, for nature enthusiasts, the open-air concert among spring- randy Goldeneyes in Bjørsvika Bay is perhaps just as good. And it is free of charge.

Oster Fjord has long been known as a good area for ducks to overwinter, especially for Goldeneyes. It was nonetheless not until the 1990s that this species began to flock to the constricted bay at Bjørsvik. The most observed is nearly 1500 Goldeneyes, in addition to a couple of hundred Tufted Ducks and about a hundred Mallards. This may well be the largest single concentration of Goldeneyes in the world, at least in relation to the collecting area.

For the birds, the main attraction in Bjørsvik is the runoff from the fish fry plant in the old factory buildings. We do not know if it is food remains that the Goldeneyes feed on, or if it is the small creatures that are attracted to thse remains. One hypothesis is that the birds eat Sphaerotilus natans, a kind of bacteria that lives in symbiosis with fungus in areas where fish feed is in the process of being broken down. The Goldeneyes also seek other areas of runoff from fish fry plants in the county, as at Nesfossen in Lindås, Ljonesvågen in Kvam, Lake Skogseidvatnet in Fusa and Alvøen i Bergen. The bird concentrations at these plants is nonetheless less than at Bjørsvik. So far, it is only in Hordaland that the Goldeneyes have flocked to the fish fry plants, but the species also has a tradition of collecting outside of larger mills, such as in Rogaland.

Even though they are most numerous in February-March, there are Goldeneyes in Bjørsvik throughout the entire winter. In periods, they may be frightened away by boats that come into the bay. There is a dominance of males in these flocks, as seems to be the rule for many of the duck populations in western Norway. We do not know where the Goldeneyes in Bjørsvik nest; the birds who visit western Norway in winter come most likely from Sweden or Finland. The nearest nesting place to us for Goldeneyes is in Hallingdalen. In western Norway we have not had more than a few occasional nesting attempts. It is believed that the winter population in western Norway showed good growth in the 1900s. The species is just as happy to over-winter in fresh water as in the sea.