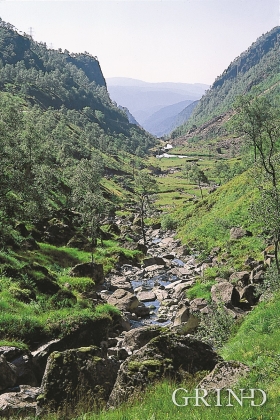 The European Highway follows the windy north-south oriented Romarheimsdalen Valley and its continuation toward the north (Haukelandsdalen). It was the ice movement and meltwaters associated with the end of the Ice Age that carved out the valley along one of the prominent fracture zones running parallel to the coast, that divides up the earth's crust in Hordaland. These fractures or faults are associated with the formation of the North Sea Basin 250-150 million years ago, but they can also have roots going back to the Precambrian. From Sunnhordland and the North Sea, we know that earthquakes still occur along similar faults. The risk of a weak to moderately strong earthquake occurring at depth along the Romarheim Fault cannot be excluded.