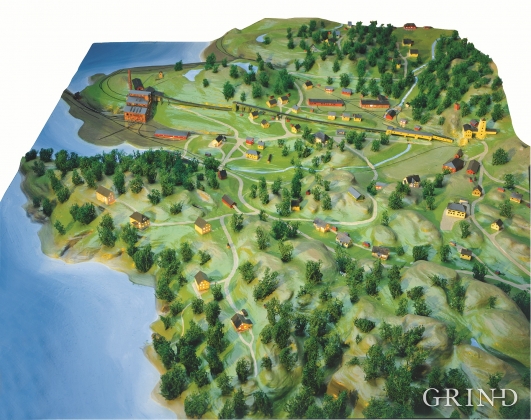 The first finds of pyrite at Litlabø in Stord came to light in 1864. Forty years later sulphuric ore was mined from an open mine. From 1874 to 1880 it was used for dynamite production. That came to a sudden end when the factory exploded and three people died.

In 1907 Stordø KisgruberA/S was founded, first with Belgian, later on with German capital, and a modern mining works was established. A lift arrangement and laundry were installed in which the ore was separated from the rock, and a special narrow railway track was built for transporting the ore to a modern shipping harbour at Grunnvågsneset. Houses for the workers were built at the mining area itself, and in separate communities in Gjerde. Rødkleiv and “Moskvadalen”. During the first years the operations were driven with steam from the mine’s own power station. In 1922 a local power station was established at Børtveit.

The Litlabø mines was a self-contained establishment in almost every way, also for the workers. Stord Kisgruber provided for school, commerce, housing, roads, electricity, refuse collection and cinema. On the other hand, when the workers established a trades union, they had to find localities outside the mining community. Folkets Hus (local community hall for workers) was built at Dale. The working culture that evolved was in great contrast to the surrounding rural community. The celebrations on May 1st were first started at Litlabø.

During WW2 command groups from Shetland made a raid on the mines to stop production. The Norwegian state took over the mines as war compensation in 1945. The operations were profitable well into the 1950s, but the Litlabø mines did not manage to compete with foreign competition in the following decade. The operations were closed down in 1968/69. The buildings and properties were bought by Stord Municipality in 1972. Today the houses belong to the workers and many of the factory buildings have been pulled down. The lift tower is still standing, and below it the mineshaft goes down 700 meters. The tunnels go for several kilometres into the ground. The remarkable office block is still standing as well as some of the other factory buildings.

In the old smithy of the mine Sunnhordland Folk Museum has created a small museum. There are permanent exhibitions with tools and photographs from the area. A large model of the plant shows how it appeared when operations were at their peak in the 1940s. A comprehensive archive of drawings and a geological collection can also be found in the mining museum.