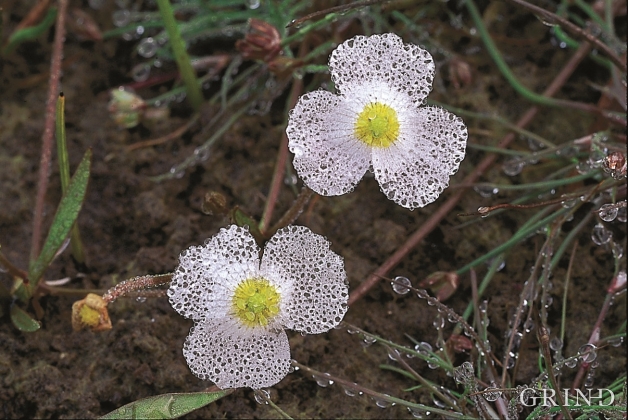 A rare and beautiful sight: Baldellia grows only in three areas in Norway: on Stord, Tysnes and Jæren. (Jan Rabben)

Several of the rarest plant species on Stord grow in or by freshwater. Species like Siberian pink cups, northern green rush and creeping pillwort are found here, but are rare otherwise in Norway. They have quite different distributions, and grow only in southwest Norway north to Sunnhordland. If the environment changes, they could disappear forever.

By Lake Ådlandsvatnet one finds these three species in shallow water in some of the coves. The best growing conditions are fine-grained, slightly muddy bottoms without other dense vegetation. They bow under quite easily in the face of competition. With their difficulties in reproducing they are easily crowded out by other species. In the warm dry summers with low water levels their seeds have the best chances of germinating.

Another lake in the same area is Lake Storavatnet. Here, the characteristic common reed grows, a two metre-high grass that is easy to see. The common reed grows abundantly and quite far out into the water. Beaked sedge and water horsetail are two more common swamp plants that grow in a belt along the shores of most of the freshwater lakes in the southern part of Stord.

The salmon and sea trout in Ådlandsvassdraget have been harvested for hundreds of years, and it is said that the parish priest complained when he lost his fishing rights because the vicarage was moved from Lower Ådland to Tyse in 1648. Since that time a dam has been built for timber, a mill and a wool factory just below Sevhølen. This prevented the fish from ascending up the river, until a fish ladder was built over the dam in 1959. Fishing for salmon and sea trout increased again, but it has decreased a bit the past decade as it has also done most other places. Fresh water trout is the most important fish species in Lake Ådlandsvatnet. Otherwise, there is good fishing for eel and three-spined stickleback, and nine-spined stickleback which is found only here in the whole of Hordaland. The lake is reckoned to be the best fishing lake in the municipality of Stord. With its fine walking trails around the lake the area is also much used for recreation.

The largest perch and northern pike have also been fished from Stord. Perch was discovered in Stokkatjødno in 1989 after an illegal introduction, but was then decimated by the pesticide rotenone. Lake Storavatnet was stocked with northern pike. This species was later eradicated by overfishing.