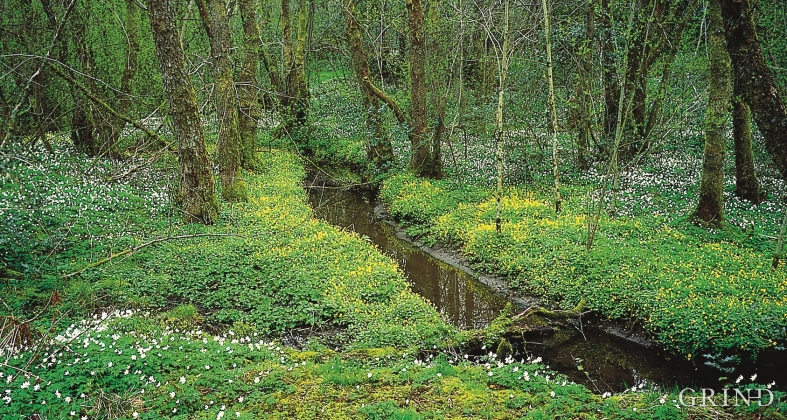 Spring in the black alder forest of Hystadsmarkjo. Wood anemone and pilewort give colour to the forest floor (Svein Nord).

One of the biggest black alder forests in the country is in Hystadmarkjo. Along the well prepared trail through the forest you can experience an exceptional nature with an unusual abundance of exuberant plant species. But what has laid the foundation for this richness?

One of the explanations can be found by digging in the ground. The thick clay layer that comprises the forest floor gives much nutrient to the plants. Black alder likes it best humid, and thrives therefore especially well in this clay, whose compactness prevents the water from disappearing down into the soil. The clay creates a continuous layer both out into the sea and in towards land. It was originally laid down in deep water, but later the land got uplifted, such that some of what once was seafloor is now dry land.

In some places the sea has inundated the black alder, which therefore stands like mangrove on a tropical beach with its roots on stilts. In the spring, there is a white carpet of wood anemone between the alder trees. Where the light from the sea gets reflected into the forest, the blossoms are tempted into flower. Also the green inlets along the shore are home to a unique vegetation. In the tidal zone between the fjord and sea the sediment is clay, and a rare species of marine eelgrass thrives. In the strand zone there are also small sandy meadows where brackish-mud rush, sea aster and hedge bindweed grow.

Black alder has a very important ecological function. It lives in symbiosis with a ray fungus (actually a bacteria) that grows in mounds on its roots. Ray fungus can take up nitrogen from the air and transform it into chemical bonds that the tree is able to use. Unlike the majority of other deciduous trees, black alder sheds its leaves while they are green. Much of the nitrogen that has collected in the leaves is released to the clayey soil when it is broken down in the autumn. In this way the black alder helps other plants meet their nutrient requirements.

The forest gives the impression of being old, with all the woodbind that winds its way up the trunks of the black alder. In fact, it is relatively young, less than 70 years old. The trees have grown quickly in this area that once was grazing land or sea meadow. There are still small remains of old, open grazing land, but the black alder is quickly invading. In the dense forest, in contrast, the tree's ability to reproduce is strongly reduced, and here there are scarcely any young trees at all. Instead, another deciduous tree is on the increase, the sycamore maple. A number of trees have come into the age of maturity, and many youngsters are now on their way up. If nature gets its way the imported sycamore maple will become a dominant tree species in Hystadmarkjo in the future

Along the southeast side of Stord there are several inlets with fine tidal areas, from north of Rommetveit and southward toward Leirvik. In Several areas these inlets have sand and gravel beaches littered with big stone blocks far out into the sea. If one digs a little in the sand, one finds clay under. In Leirvik itself it is now so built out that only old pictures make it possible to understand the name (“leira” = clay). Mjelkjevikjo in Hystadmarkjo has also gotten its name from the word clay. This word reflects the "milky" colour of the sea when the clay is washed out by waves crashing into land.

The source of the clay lies 6 kilometres further into the fjord, and was laid down about 11 500 years ago. A glacier with a 20-30 metre high front, more or less as one sees in the fjords of Greenland today, ended between the islands of Huglo and Halsnøy. The mountain of ice that rolled around or ran aground and then stayed put, melting after it had calved from the glacier, dumped off blocks of rock. Kloster Fjord became grey-green from the small clay particles. The particles coagulated in the brackish fjord water and fell to the bottom of the fjord. An up to 200 metre- thick layer was deposited where the fjord is deepest, but clay was deposited on the bottom also nearer land. After the land got uplifted, it is possible to find this clay in the coves on the southeast side of Stord. On dry land, we find the clay up to an elevation of about 30-40 metres.

to hear the birdsong in the black alder forest in Hystadmarkjo. There is most birdsong early in the morning or just before sundown in the evening. Then, the air is clearest and the song carries furthest. This is why the birds sing most then. The singers are not always easy to see, so it is an advantage if you know the songs of the most common birds. The morning songbird that distinguishes itself above all others is the robin. Other common species are the blackbird, fieldfare, chaffinch and several of species of tit. In the late evening in Spring, the flight of the woodcock over the forest is also an experience.

The very moist forest floor gives good growing conditions for a number of insects, mostly black flies and midges, that come in dense swarms. The water shrew, which is unusual for us, is found here. The weasel is often seen. In fact, there is also hare in this forest - perhaps this is why the horned owl comes to inspect the area occasionally.