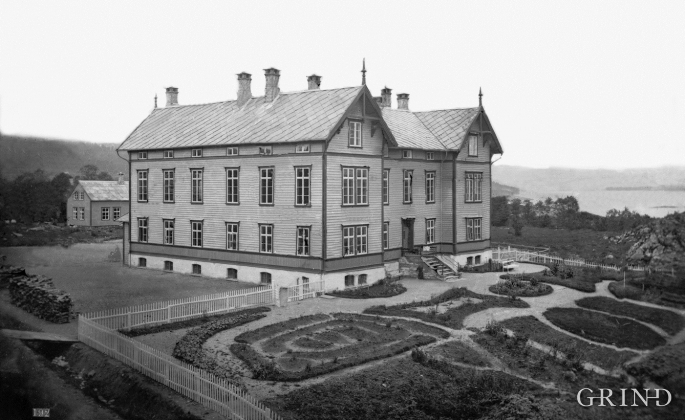 Stordøens Seminarium, one of the first teacher training colleges in the country, as it looked around the turn of the century 1899/1900. (S.F. G.)

In 1838 Stordøens Seminarium was established by the parish priest Claus H. Daae as head. This was the first seminary in West Norway and likewise one of the first in the country.

The school was located in the “Communal Building” at the rectory of Tyse. Between 8 and 40 pupils were accepted every year until 1860. Up to then 326 pupils had been accepted at the school.

Two buildings on the farm Øvre Rommetveit were acquired to expand the school. In 1866 the first large school building was erected. A training building was erected in 1881. The next intensive building period was in 1917 with an auditorium, hall of residence and teachers’ housing on the site. A park-like garden was established between the school building and the sea. A large amount of exotic plants can still be found here.

In 1875 the position of rector was separated from the position of priest. The seminary changed its name to Stord Lærarskule and later on to Stord Lærarhøgskule (Stord Teacher Training College). “Seminaret” became such a fixed concept in the consciousness of the people in Stord, that it became a permanent place-name in Stord.