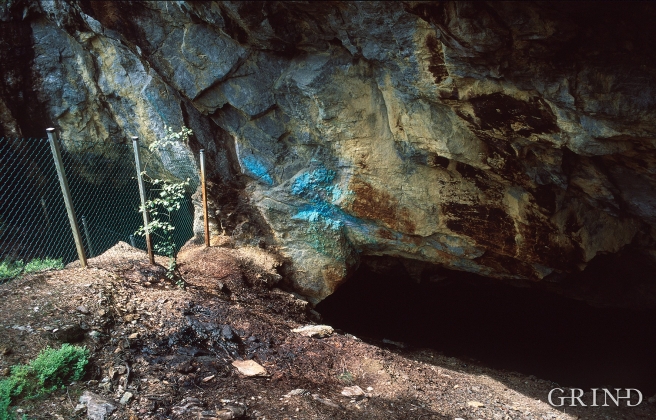 Crystals of the copper mineral "copper vitriol", a mineral that is found together with the copper ore in Tveit mine. (Svein Skare)

The copper mines at Tveit have not been in operation for a hundred years, but there is a sign to the mine locality, and some buildings and the remains of the trolley tracks are still visible. The mine opening is situated by the foot of an outcrop of hard quartzite surrounded by marble and mica schist. The longest corridors reach 35 metres into the mountainside. Copper ore is most commonly found in association with the white quartz veins. The deposits are formed when heated solutions of copper and quartz-rich water leave behind ore and quartz in open cracks in the bedrock.

The mining operations are believed to have begun in the late 1860s. The ore was transported by horse and buggy to Kvednavikjo for further transport by ship. In 1885 the mining operations ceased. The last year there, is believed to have been a steam train that hauled the ore wagons on a trolley track down to the sea. After a short period of experimental operation at the beginning of the Twentieth Century, the mining hammers in Tveit mine ceased for good.