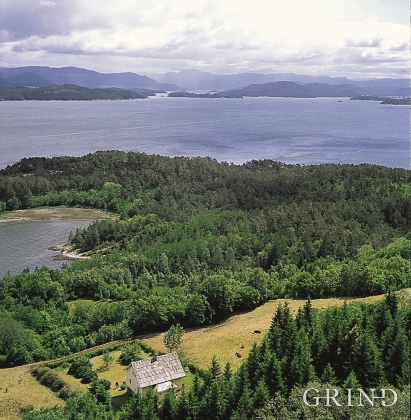 North of Brandvik on Huglo, the mountainside slopes steeply toward the east. Below the road the landscape flattens out into a gently undulating terrain toward the fjord. This side of Huglo is characterized by a zone of slate and marble with landslide- and weathering-soils. These rock types feed enough nutrients to support a fertile, dense deciduous forest interspersed with a pine trees with notably large trunks. On the upper side of the road, English yew creates a continuous, dense under-canopy, partly together with holly, black alder and Hazel. There is scarcely another locality in Norway where one finds as much English yew as at Brandvikneset.

The mature yew seed has a juicy, sweet cloak around the seed. This cloak is the only part of the yew that is not poisonous, and it gets eaten by birds, especially thrushes. In this way the tree gets spread over large distances, and it can even take root on rock shelves and other inaccessible places.

From the yew a chemical called taxol is extracted, that is used in the treatment of ovarian and breast cancer. There have been plans to export yew from Hordaland for use in the pharmaceutical industry. The medicine today that is produced from the yew tree is imported from Asia.

Many yews, such as in Møkjedalen on Varaldsøy Island, are characterized by stagnation, and there seem only to be large individuals left that are several hundreds of years old. We believe that these are the remnants of a larger distribution that existed during the warm period from about 9000 -4500 years ago. Some places the availability of seedplants is good, especially in Sunnhorland and along the north side of Hardanger Fjord. At Brandvikneset there are unusually many new seedplants. This makes this yew forest one of the most vigorous in the country.