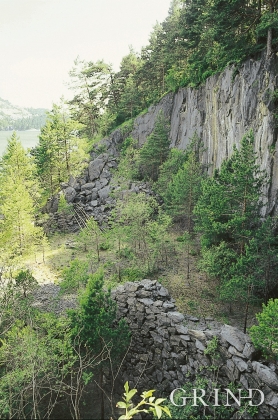 The limestone quarry on the east side of Storsøya Island is easily visible in the terrain. (Svein Nord)

On Storsøya Island, English ivy grows nearly everywhere. It creeps along the ground and climbs all the way to the top of the tree trunks. Together with holly, the trees of juniper, yew and an unusual pine forest keep the island green the whole year 'round.

From Langenuen, south of Jektevik, we see Storsøya Island as a flat, densely forested island that distinguishes itself clearly from the naked bedrock on Skorpo and north on Huglo in the background. The explanation is that Storsøya is situated in a zone of calcite marble (metamorphosed limestone) which supplies nutrients to the plants. This kind of bedrock is also easily dissolved by acid rain and humic acid. This is why we find up to 3-4 metre deep depressions and fissures in the terrain on the island. These depressions are known as karst.

The pine forest on the island of Storsøya is special because it is so near the sea while at the same time growing on limestone-rich soil. In addition to the wintergreen bushes and trees, there are a number of species of calcium-loving herbs and grasses in the plant cover. In the karst-hollows the soil is a bit deeper and maintains the moisture better, so some species grow best here, for example, hard shield fern and guelder rose (European cranberry). At the edge of the forest and out along the beach rock one finds the plant types that require good light conditions and don't like to be surrounded by dense vegetation. A total of 286 species of vascular plant have been documented. This is very many, especially considering that Storsøya is quite narrow and only one kilometre long.

The rich natural resources on Storsøya were over-exploited earlier. The forest was just about clear-cut. This can explain why the pine trees are just about the same age and for the most part younger than 100 years old. The pine and silver fir that were planted later are now going to be removed. Also limestone and marble blocks have been taken out from the area. We can see clear remains of the limestone quarry in the southeast part of the island.

The area was designated a protected landscape in 1977. Its status was later changed by the environmental protection authorities to a stricter level, and it became a nature preserve. The main objective was to take care of the unique karst landscape and the unusual pine forest.