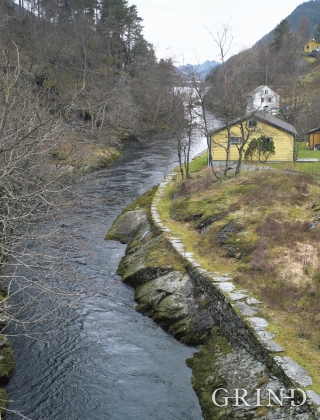 The canal between Skogseidvatnet and Henangervatnet, Dregeidkanalen, was completed in 1887. The canal is roughly 200 m long, at least 3 m wide at the base and 0.70 m as the lowest depth. In 1912-1913 the towpath was built higher and longer.

In an old document it states: “Over Skogseidvand and Henangervand there is a quite considerable traffic”. Not least the people from Håland valley transported wood and other agricultural products on this waterway. At the most 20 boats passed in both directions every day. The traffic followed the difficult and dangerous river course between the lakes, the Drageid river. Here people had to fasten rope to their boats and walk along the riverbank. Sometimes human life was lost in the course of pulling the boats.

The canal was a great advance for around 70 farms. At one time there was a ferry on the lakes and through the canal. The bridge across the canal was completed in 1936.