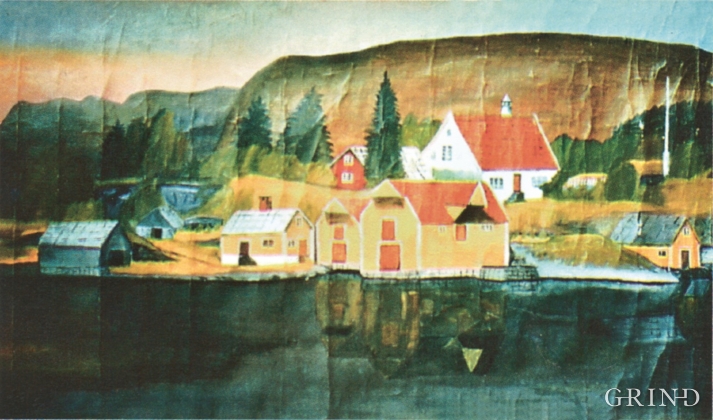 The trading post of Engevikhavn. Oil painting by Knut Olav Engevik around 1926.

The guesthouse activity in Engevik in the 1700s could not have been very extensive. But a hundred years later a trading and guesthouse centre developed on a piece of land called Engevikhavn. This is the place where Segelcke had obtained licence to operate an inn and guesthouse business in 1729.

The trading post was developed around 1820 by Lars S. Meidell, son-in-law of lieutenant Nyegaard, who then owned Engevik. Based on the abundant fisheries in and around the Sævereid fjord, Meidell created a business that comprised export of lobster, import of corn, guesthouse and trading store. Up to 50 people could be employed during the herring season. This created good secondary activities in the rural community, both in coopering and shipbuilding.

The activity in Engevikhavn reached its climax in the 1840s and ‘50s. From 1847 there is a detailed account of Engevikhavn, penned by a German doctor August V. Moritz, who was on a trip to Hardanger. What surprised him was the proficiency in German amongst the Meidell family, which can be explained by the close trading links with the German Baltic towns. Meidell had his background from an officer’s family in Estonia.

When the trade was liberalised in 1842, Meidell obtained licence to operate a store and an inn. He built a general store and a bakery and employed a baker. The new trading post had its hinterland from Lukksund in the south to Øvre Hålandsdalen in the north.

Lars Meidell transferred the property to his son Frantz in 1863. In his time the activity concentrated around guesthouse operation and country store. He fitted out the old main building as a summer guesthouse. In 1880 Bjørnens Dampskipsselskap started regular traffic on Engevikhavn, and from 1885 the place had a post office. Competition from new country stores and post offices in the hinterland increased steadily and around 1910 the country store was closed down. The guesthouse was in operation until the 1920s. It is as a recreational place for better-off Bergen residents that Engevikhavn still lives on in the memory of older people.