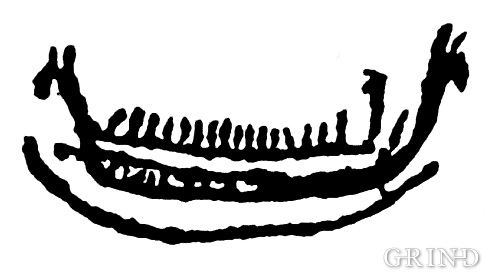 On the east side of Samnøya there are rock carvings on two rocks, a couple of hundred metres apart. In both places ship motifs are the dominating themes, with more than 20 figures in all. On the largest area there are also shallow depressions. On two of the ships in the largest area the stems of the ships end in animal heads, similar to the Viking ships. But the carvings at Samnøya had long been a prehistoric relic when the Vikings sailed westwards. Ship figures of this kind have been dated to the end of the Bronze Age, well over 500 years BC.