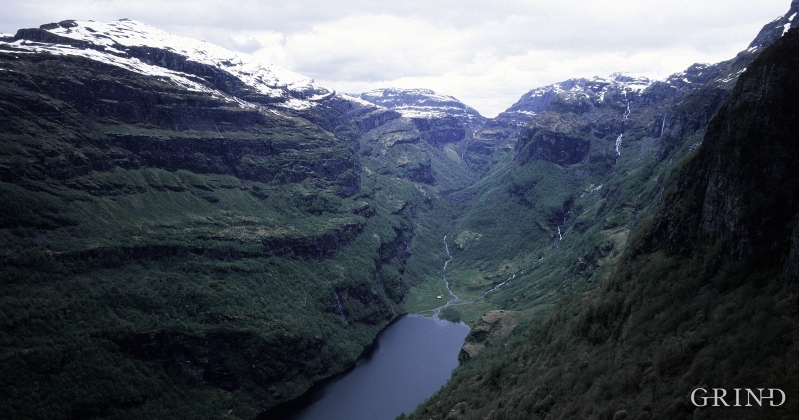 Precipitous cliffs tower over a thousand metres straight up into the air in wild and narrow Kikedalen at the end of Lake Gjønavatnet. Even in mid-summer, there are only seven hours of daylight down in the valley bottom. During heavy rainfalls, many small and big waterfalls gush over the mountainsides.

Down toward Lake Gjønavatnet, the valley bottom forms a roughly three hundred metre-wide, flat grazing area. Upwards along the valley sides there is lush deciduous forest including, among others, ash, elm, hazel and birch. Further in, below Setehaugtjørna tarn, landslide material has filled up the whole valley bottom with large blocks of scree, such that the river from Setehaugtjørna tarn most often runs deep down in the scree. A half of a kilometre northward from this tarn, the valley narrows to a steep gorge along the Skaraelva river. In this gorge there is an old trail over the mountains to Frøland in Samnanger.

In Kikedalen there were permanent settlements throughout the whole Iron Age and until the Black Death plague. The ruins from the farmhouses lie on the terrace down by the water. Legends tell that the last Kikedals farmer lived from livestock and hunting. The leaf-feed in the valley was reckoned to be so valuable that other farmers continued with leafing even after the farm was abandoned. Studies of the vegetational history reveal that there has been leafing from the deciduous forest here for over1500 years. The tradition was discontinued in the 1950s, 600 years after the Kikedals farmer lay down his sickle.

Kikedalen has such a distinctive topography, vegetation and cultural history that the area is featured on the national list of especially valuable landscapes. The marked trail to Kikedalen starts at Gjøn.

From Mundheim in Kvam in the south, to Frøland in Samnanger in the north, runs a giant ravine through the whole of Fusa municipality. And along the Mundheimsdalen valley, the highway goes in long, straight stretches of road. The explanation is to be found in the geology.

The road runs along one of the big, nearly north-south trending faults that cut their way through the bedrock in Hordaland. Not only the Mundheimsdalen valley, but also Lake Gjønavatnet, Kikedalen valley and the 500 metre-deep Øyne Fjord that divides Varaldsøy Island from the mainland, are carved by water and ice along this fault.

Terrain forms that are carved out along such large, often straight faults can be called “Fault-valleys”. Such valleys generally have extremely steep sides, where landslides and avalanches can make it difficult for people to walk. Both at Mundheim, Gjøn and in Kikedalen Valley we see signs of landslides. Gjøn, on the east side of Lake Gjønavatnet, was isolated from the rest of the world both in 1997 and in 1998. It was noticeable that the narrow, town road sank already before 1997, but first during that year it got so bad that the road was closed. After heavy rainfall in February, 1998, the whole road sank into the deep Lake Gjønavatnet. Mica schist and the landslide deposits had weathered to a clayey weathering soil in the sloping terrain. The heavy rain made the soil increasingly heavy and at the same time reduced the friction, such that the foundation of the road slid out from under it.

A smaller fault further to the west in Fusa has made furrows in the terrain that distinguish the mountain tops of Fusafjellet, Håvikamulen, Haugafjellet and Rødsfjell. Along a few of these faults, such as at Baldersheim and west of Sævareid, one finds diabase sills similar to those near Espevik at Tysnes and several other places in Sunnhordland. These are the easternmost sills of this type known in western Norway.

The Mundheims fault - one of the longest faults in the county - crosses Hardanger Fjord and continues through Mundheim Valley and further along Lake Gjønavatnet and in to Kikedalen. (Haakon Fossen)