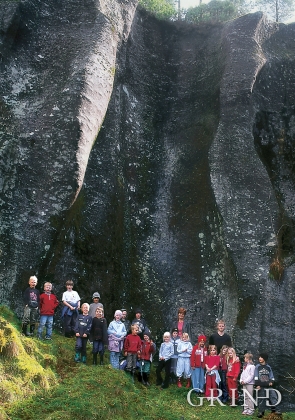 First and second graders in 2004 by Eikelandsosen school in front of the glacial potholes by the Koldals River. (Svein Nord)

"So many and such big potholes as are found at Eikelandsosen, we don't see other places in western Norway, and as beautifully polished as the mountainside is along the river up to Koldal , one would look a long time to see anywhere else. There is much to dazzle a geologist's eyes. If only these features could bring others the same joy!"

Fusa has enough glacial potholes, not only in Eikelandsosen, as geology professor Niels-Henrik Kolderup boasted in the middle of the last century, but also in Sævareid, Femanger og Sundvor. Even the symbol for the municipality of Fusa evokes images of swirling water and potholes.

The concept of "Giant pots" and "mountain-dwelling giants" and names such as «Gygrarøvo» (“Giant woman troll”) og «Helvete» ("Hell"), suggest that fantasy has played a big role, and that the origin of these natural phenomena has been difficult for most people to understand.

Glacial potholes are most often formed in the relatively soft bedrock mica schist, but they are also found in granite. White inclusions of milky quartz in the mica schist are much harder than the softer mica bedrock. In the walls of the potholes the inclusions therefore stand out a little bit from the bedrock. Some places we find stones that have swirled around in the pothole still lying in the bottom. These are always made of a harder rock type, either granite, gneiss or quartzite.

The glacial potholes that lie in rivers, show how the pothole was formed. Running water caused the gravel and stone to move. Where there is a little hole in the bedrock in the bottom of the river, the stone will swirl around and around when the current is strong enough. The stones wear away the bedrock as they themselves get worn down. The river has a continuous supply of new stones, and they keep up this work, making the potholes ever bigger. The carving takes place especially during periods of flooding. When the current weakens, the swirling stones fall out and get deposited at the bottom of the pothole. During the next flood, the work begins again.

When we find large potholes in dry ravines or far away from rivers, we have a problem finding an explanation. Could there really have been running water at such places? There must have been a glacier present in order to accomplish this. The meltwater rivers running under the glacier flowed in the most unusual places, sometimes even upstream. The pressure conditions under the glacier pressed the water a bit up from the valley bottom where the water followed a fracture-zones in the bedrock and dug out a ravine of potholes. Some places it is clear that the ravine was created by several potholes merging together. Some of the potholes have a weakly spiral form that suggests that the water has flowed in a spiral pattern down along the walls of the pothole. We see this clearly in one of the potholes in Eikelandsosen. Here, we see several potholes along the walking path, just 50 metres northeast of the centre. The biggest pothole has a clear spiral form. A hole was exploded through the pothole when the new road was built, therefore it is possible to go in. Further to the west there are several smaller potholes in the bedrock.

Olaf Hanssen, who mapped the glacial potholes in Fusa in the 1930s, believed that the other half of the half-glacial pothole had slid down or been removed by the glacier. Could there be another explanation?

In Eikelandsosen there are half-potholes several places. The biggest lies in the Koldalselva River. 250 metres above where the road to Tysse branches off, you can park in the abandoned outer swing. There, you will see a sign that shows the way to the potholes. Here you come in at the bottom of the 13-14 metre high half-potholes. The glacier itself must have made up the other half. The meltwater under the glacier, laden with gravel and stone, polished away the ice, but the glacier advanced steadily forth over the mountainside and kept supplying the outside of the pothole with new ice. In half-potholes, we often find indented stripes that show that the pothole, in periods with less meltwater, got inundated such that the glacier reached all the way in to them and carved into the bedrock.

Even though we now know much about how potholes are formed, it is nonetheless exciting both for professionals and amateur naturalists to study these mysterious features.

Map of the glacial potholes in Fusa, from Loaf Hanssen's mapping in the 1930s. Several of the potholes (i.e. in Sævareid and Sundvor) have been destroyed.