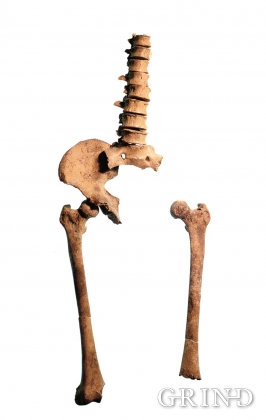 Even though we know of several hundred burial places from the Stone Age in Hordaland, we do not often hit on the Stone Age Man himself. But there are a few.

One of these rare finds came to light at Søre Holmefjord in Fusa a spring day in 1984. On the farmstead was an overhanging stone slab, which nobody knew could contain anything of interest. The owner was busy removing earth from the slab when he became aware of bones sticking up from the earth mound. He notified the authorities about the find, and the place was subsequently examined by archaeologists from Bergen Historical Museum.

There were human bones in the mound. They were of a man in his thirties. In his life he had had a height of around 1.67 m. He had been badly afflicted with a bad back, one of his back vertebras had a mark from an injury the man had suffered some time before he died. Radiological dating showed that the man lived some time around 2,100 yeas BC, i.e. in early Stone Age. There were no signs to indicate that he had lived under the stone slab where he was buried.

But some thousands of years later some Iron Age people sought refuge here. In one of their cooking hollows cooking chards from 4-500 AD were found. Further up in the earth layers were found iron slag, pieces of sharpening stones and pieces of a baking stone from the Middle Ages. The overhanging stone slab seems to have served both as scullery and smithy for those who lived at Søre Holmefjord in times gone by.