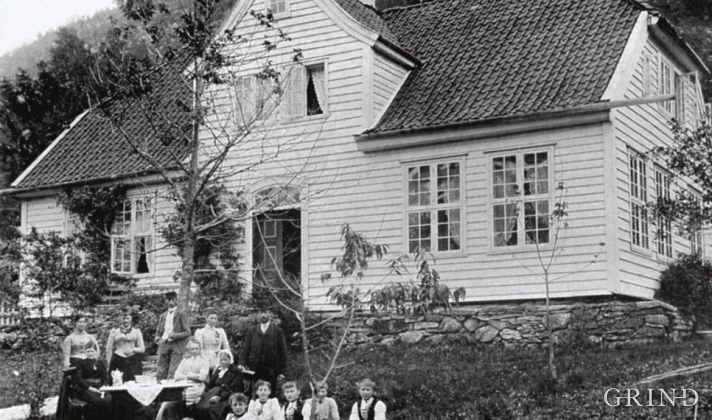 Halfway into the Sævareidfjord lies the officer’s farm Engevik. In the beginning of the 1700s the farm was in part estate of the crown and owned by farmers. In 1724 lieutenant-colonel Christian Wilhelm Segelcke settled there and erected a new farm around an imposing main building a little way north of the old farm site.

Engevik is situated in a sheltered location down towards the fjord; a west Norwegian farm for state employees dating from the last years of the autocratic power. During the sale of crown property in the 1720s Segelcke bought the Os church with annexed churches and associated land properties. The land properties provided necessary additional income for the state employees. It is on this basis that we have to view the licence from 1729 to operate inns and guesthouses. The district law officer P.Heieberg was of the opinion that this measure was completely unnecessary, both for “…the General Public and Travellers, as there are none other than Farmers from up the Valley (Hålands valley), who head for the Town…” They might as well overnight on their farms, the officer opined, who pointed out that “…here there are no proper Inn-keepers or Coast Dwellers, but several Subordinate Officers have, with the Licence of the Lieutenant-Colonel, kept Inns for Beer and Spirit at different places in the district…” Segelcke himself was rarely at home on his farm. He was appointed general major and served in Copenhagen until he died in 1763.

The two following owners, major Hartvig Carl Filip Segelcke and his son-in-law, Knud Nyegaard, continued to develop the farm. In 1769 the main house burned down, and the major built a new one, a little smaller, on the same site the following year. It was only in the 1800s that the farm attained the form and shape it has today, with two boathouses, hayshed with cowshed, stable, goat-shed, smithy, storeroom, scullery, storage house on stilts and servants’ hall. Surrounded by a white-painted picked fence, the garden with its summerhouse, small salute canons, and the main building from 1770 with half-hipped roof, the style was characteristic Bergen classicism.